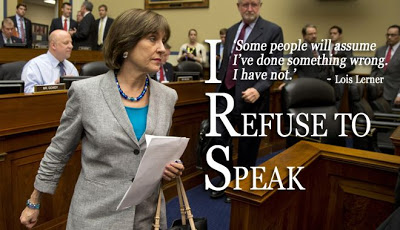 Facebook
Twitter
Pinterest
WhatsApp
Lois Lerner, director of the IRS division that targeted conservative groups, left the House Government Oversight Committee hearing after invoking her Fifth Amendment right against self-incrimination and refusing to answer questions about the IRS scandal.
It’s interesting that the Internal Revenue Service division chief who oversaw targeting of groups based on their political affiliation doesn’t want to answer questions in a Congressional probe. The big questions remain:
However, Learner is not working in that division of IRS anymore. She’s now directing the IRS division that will manage and oversee ObamaCare. So you can rest assured that the healthcare that you receive under this massive government program will not be based in any way on your political affiliation (so long as you’re a member of the Democratic Party).
Remember that IRS is a leading force in ObamaCare since the Supreme Court ruled that it is only lawful because it’s a TAX.