Facebook
Twitter
Pinterest
WhatsApp
Some of you prefer the Carl Gustaf M3A1 (M3A1 is the US version of the Carl Gustaf recoilless rifle) to the RPG-7. I’m with you. I’ve always liked the Carl Gustaf, but were heavy to haul around with you (about the same weight as a .50 Barrett with much heavier ammo).

The new, US demand for a lighter version works brilliantly and only weighs about 8 lbs. The load-out for a SEAL platoon used to require distributed weight of at least 2 and often 4 AT-4 anti-tank launchers (disposable) for missions in Iraq during Operation Desert Storm. That gave you one shot per launcher. Depending on the mission that was enough, but the ammunition was not flexible to give you different options with each round. This is the new way forward for light infantry and SPECWAR troops. One launcher and the distributed weight of ammunition.

OR
There is the RPG-7, now made by AirTronic in the USA. There are very few weapons that are as iconic as the venerable RPG-7, and you can resupply yourself with rockets on any third world battlefield – or on the mean streets of Guadalajara, Tijuana or Juarez, Mexico, if you’re so disposed.

The RPG-7 (РПГ-7) is a portable, reusable, unguided, shoulder-launched weapon with a variety of rounds available.  The RPG-7 (Ручной Противотанковый Гранатомёт – Ruchnoy Protivotankoviy Granatomyot – Hand-held anti-tank grenade launcher) is used by drug cartels in Mexico, revolutionaries in Africa and is still being produced in very large numbers by the Main Missile and Artillery Directorate of the Ministry of Defense of the Russian Federation (GRAU).

In the news: RPG-7’s are being used to halt urban renewal in Saudi Arabia. The Saudi Interior Ministry said that a Saudi special forces soldier was killed in a rocket-propelled grenade (RPG) attack in the Qatif area of Eastern Province late on 16 May. Five soldiers were injured.

The details of the attack have not been released to the public, but this is the second violent incident in Qatif in a week. Last week one child and one adult were killed and 10 people were injured at the redevelopment site.
The most important threat element in this story is the use of an RPG to disrupt an urban renewal project. RPGs are weapons of war, not instruments of political protest. They are common enough among the Taliban in Afghanistan and in other countries at war. They are not common in Qatif or anywhere in Saudi Arabia.

This probably was the first time this type of weapon has been used by anti-government elements in Qatif or anywhere in Saudi Arabia’s Eastern Province. The use of this weapon represents an escalation in the outside support for the Shiites activists/terrorists in Qatif. Conversely, it means Saudi security has lapsed badly.
From the Saudi Press: Violence between Saudi security forces and Shiite militants in Eastern Province is commonplace. Authorities are now redeveloping some of the neighborhoods in the area as part of a major development push. The work includes the demolition of nearly 500 structures, including residential buildings, and could be a reason for the recent increase in violence. 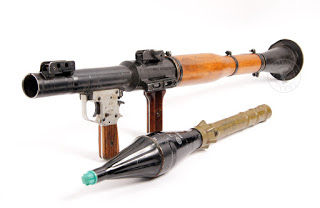 According to the Interior Ministry, suspected terrorists used rockets, explosive devices and land mines to obstruct work at the development project, attacking security personnel and construction workers.
Additional Background: Qatif is predominantly Shiite Muslim and is perennially restive. Iran presumes to act as the protector of the Shiites there. The Saudi government accuses Iran of fomenting unrest, supplying military-grade weapons to and infiltrating agents among Shiite communities in Saudi Arabia.
The disruption caused by the redevelopment project focuses Shiite grievances against the Sunni government. More attacks at the renewal project are likely. More attacks by RPGs mean that Iran has escalated its support for the local terrorists.