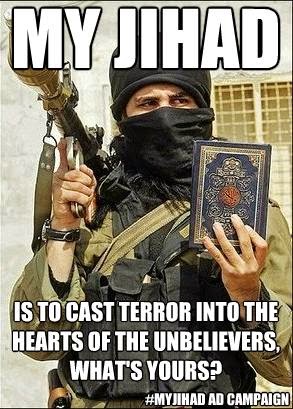 I depart from some of you who read this blog who argue that a study of Islam is a bad thing. My feelings on the matter (may not matter but…) run in a different direction. I think that it’s vitally important that “we” and our children know all that we can about Islam. Ignorance on the subject only makes us more vulnerable. For example, if people had a better understanding of Islam, many who voted for Barack Hussein Obama (twice) may have re-thought their choice of leadership for America.

(Fox News) A Marine Corps father has been banned from his daughter’s school after he complained about her homework assignment on Islam.

Kevin Wood said his 11th grade daughter was asked to write a three-page essay about Islam’s five pillars, Mecca and Mohammed at La Plata High School in Maryland. He argued that students can’t study Christianity in schools “but we can force-feed our kids Islam.”

This father’s issue is understandable. Religion is bound to history the way hydrogen and oxygen bind to create water. Thus Christianity should be taught with equal effort to teachings on Islam.
America is at war with Islamic groups, though not necessarily with every practicing Muslim. I must admit that dividing one from the other is often very difficult. It’s made even more difficult when the national leadership is so acutely sensitive to any negative connotation that is put on typical Islamic activity, mischaracterized as “workplace violence”. If a practicing Muslim does what the Prophet Mohammed (as the mouthpiece of God) demanded, he has a duty to kill or convert — everyone. That philosophy is what led to the spread of Islam in the first place.
Islam is political. It’s a failed political system, and it is not just a religion as some high in the US Government presently assert. Islam can not co-exist with other faiths or systems of belief or disbelief because it requires compulsion (or cruel punishment/execution) and a lack of ability to live and let live. All you need do is look at any Islamic State, the holiest two are Iran and Saudi Arabia (if you ask the Iranians or Saudis).
Study Islam. Know what it is in all of the guises it assumes. Teach your children.