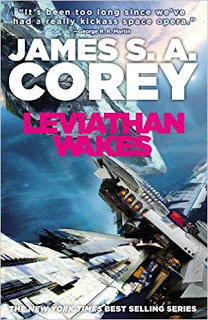 Over the Christmas break, I’ve been reading this series. Hollywood based a television science fiction series on The Expanse (Syfy Channel), and I frankly had a difficult time following it. The second season is due to hit the air on February 1. The books series is much better than Hollywood’s treatment of the series.

If you were to ask me what I liked best about the series, I would tell you that the writing is very good. I didn’t want to like the series, because I’d seen the Syfy Channel’s take on it. But the writing, the character development, the plot point management and the story in general is very well done. The authors, James Corey (pen name for a writing team of two guys living in New Mexico), delivered.
Season 1 Trailer
Season 2 Trailer

Leviathan Wakes is James S. A. Corey’s first novel in the epic, New York Times bestselling series the Expanse, a modern masterwork of science fiction where humanity has colonized the solar system.

Two hundred years after migrating into space, mankind is in turmoil. When a reluctant ship’s captain and washed-up detective find themselves involved in the case of a missing girl, what they discover brings our solar system to the brink of civil war, and exposes the greatest conspiracy in human history.