We all know that Attorney General Eric Holder is shielding President Barack Obama from the accountability and ultimate reckoning that will come if he provides Congress with the documents in his possession regarding Operation Fast and Furious. If it became public, Holder might end up doing a stretch in Federal Prison – while Obama can claim immunity in the US. If the Mexicans got a hold of Holder, they could throw him in Amoloya Prison* near Mexico City where he’d spend the rest of his life.

Mexico is not happy about Operation Fast and Furious where the Obama Administration facilitated the sale of firearms from the US to Mexican drug cartels so as to promote their gun control agenda in the US. It backfired. Sort of like ObamaCare, but with more dead bodies laying around.
Now Holder wants to be let off the hook, because he’s still in Contempt of Congress. He is hoping that a federal judge will release him from accountability. (READ MORE HERE)
There has been a nagging question. How can a US Attorney General be effective leading the nation’s law enforcement efforts when he has been held in contempt of Congress for “lying”** and failing to provide documents under subpoena?

** The “new normal” doctrine in the Executive Branch of government holds that if “you can keep your doctor, your health plan and your hospital” is not a lie, neither are all the whoppers that Holder told to Congress while under oath. 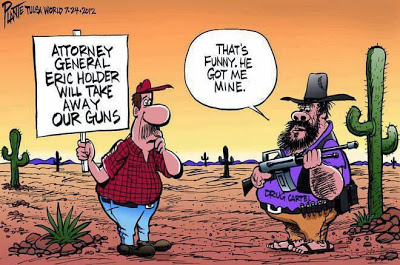 I wonder if there is a double standard at DOJ? What if FBI or DEA agents lied to Congress? What would Holder do to them?