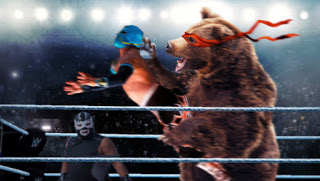 (LINK) STAMFORD, CT—The pro wrestling world was rocked last week when a new challenger arrived on the WWE circuit weighing in at 890 pounds, possessing 10-inch claws, and the strength to crush bones into gelatin. “He calls himself ‘the Grizzly’ and he is unlike any other wrestler anyone in the WWE has ever come up against,” said wrestler Seth Rollins from his hospital bed after a brief run-in with the massive opponent. What makes the Grizzly so unique? He is a trans-grizzly bear; the man recently decided to identify as human after being born an Alaskan grizzly bear. Along with his new identity, he has embraced his dream of becoming a champion human pro wrestler.
“The Grizzly has stated that his preferred pronouns are he/him/human and so we are going to respect that,” said A.J. Styles, wincing in pain as doctors attempted to realign his spine — another victim of the Grizzly’s punishment…
Ice Age News 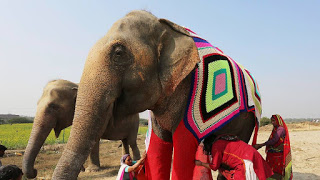 This will become a regular feature on Virtual Mirage as we report on the coming ice age and how it is impacting people around the world.

(LINK) Elephants in India are sporting colourful woollen jumpers after villagers knitted the super-size garments to protect the animals from near-freezing temperatures.

Women in a village near the Wildlife SOS Elephant Conservation and Care Centre in the northern city of Mathura reportedly began producing the colourful, pyjama-like garments after staff at the centre warned temperatures were approaching sub-zero at night.

A MONTH WITHOUT SUNSPOTS

h/t John D., reporting from Norway where global warming is unable to reach due to global cooling.

The last time a full calendar month passed without a sunspot was August 2008. At the time, the sun was in the deepest Solar Minimum of the Space Age. Now a new Solar Minimum is in progress and it is shaping up to be similarly deep. So far this year, the sun has been blank 73% of the time–the same as 2008.

Solar Minimum is a normal part of the solar cycle. Every ~11 years, sunspot counts drop toward zero. Dark cores that produce solar flares and CMEsvanish from the solar disk, leaving the sun blank for long stretches of time. These minima have been coming and going with regularity since the sunspot cycle was discovered in 1859.

However, not all Solar Minima are alike. The last one in 2008-2009 surprised observers with its depth and side-effects. Sunspot counts dropped to a 100-year low; the sun dimmed by 0.1%; Earth’s upper atmosphere collapsed, allowing space junk to accumulate; the pressure of the solar wind flagged while cosmic rays (normally repelled by solar wind) surged to Space Age highs. All these things are happening again.

Some of you have asked me how we avoid dying in twelve years due to the encroachment of ice and glaciers. Since I’m neither a politician nor am I a Hollywood celebrity, I can’t give you answers like, ‘do away with air travel’ or ‘kill all cows on the planet’. I have two 4×4 vehicles that burn gasoline and I burn wood in my fireplace to stave off arctic conditions in Arizona. I’m trying to do my part.
Stay warm my friends!