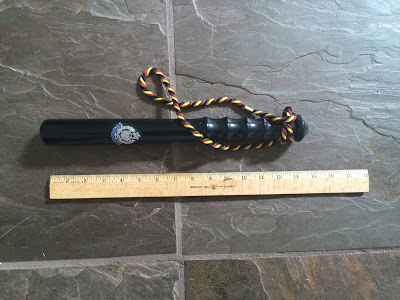 Facebook
Twitter
Pinterest
WhatsApp
Modern policing began with Sir Robert Peel in London and morphed out from there. There are a number of early law enforcement tools that are still in use today. Some of the least recognized are saps and truncheons. Thus, I thought that it might be useful to explain them here on this blog.
Truncheons

15″ of second growth hickory. Sometimes referred to as a police baton (British pattern).  The one pictured below was presented to the author by the Royal Hong Kong Police in a nice presentation box, but it’s identical to those carried by police throughout the old British empire.

Police in the US took a different path with various lengths (about twice as long) of police batons, also made of hickory and later aluminum (PR-24) and plastic. Those were generally replaced by the telescoping ASP, also made of metal. 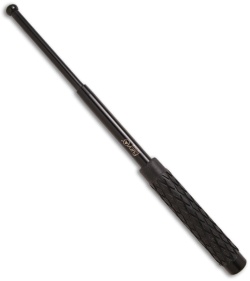 PR-24 (the unit pictured – with nomenclature – is constructed of plastic) 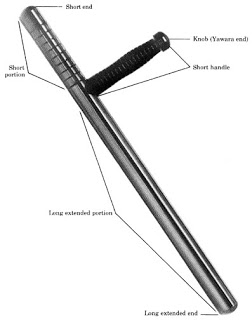 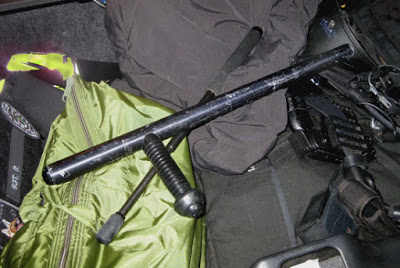 The PR-24 is so named because it’s twenty-four inches long. I have heard that PR stands for prosecutor, but I don’t know that for a fact.

Most police uniform trousers still have ‘sap pockets’ sewn into the garment between the front and rear pockets. These are generally used to hold longer barrel flashlights these days since the day and age of the sap would seem to have run its course…maybe.
Bob Gonzales made saps, arguably the very best, that were used primarily by law enforcement officers in Southern California. The 415 was the lightest model (pictured in the video below), the 245 was a mid-weight sap and the 187 was the heaviest and longest (possibly the most difficult to use).
415 Gonzales Sap (available here)

26oz of lead has a flat rounded body; lead shot filled and is covered in black plain leather. Measures, 11 ¼”.  The original 245 Gonzales has a leather thong that is threaded through a hole in the laminated leather handle/body of the weapon. The current model available from Tex Shoemaker has a different retention strap. That strap runs parallel with the body of the sap, much like the old beaver tail saps did (see photo below).

Gonzales Saps have a significant advantage because of the “snap” imparted by the swing as the lead is the striking surface. It spares the user potential wrist pain while imparting maximum damage.

35 oz of lead, has a flat body; lead shot filled and is covered in plain black leather. Measures 18″.

Powdered shot is sewed into the glove opposite the knuckles. It was used to strengthen a punch in the same way as a roll of dimes or pennies may be used. The disadvantage of using sap gloves comes with the inability to effectively fire a handgun, wield a concussion weapon, operate a taser or even drive a car while wearing them.

In this modern age, they are available after a fashion, with much of the functionality removed as with the Hatch Defender. I’m not criticizing the glove itself, but moving the shot to the knuckles, while allowing the user to operate guns, cars, etc. takes away the bulk of the raw striking power of a genuine sap glove. 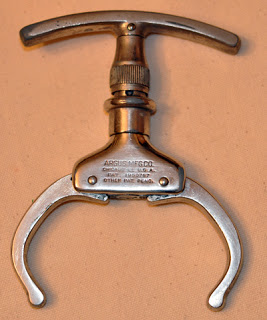 The Iron Claw was a pain compliance device that is placed around an individual’s wrist and cinched tighter to encourage them to stop resisting. Sometimes referred to as a ‘come along’. Often used in conjunction with handcuffs.

Yes, if you don’t double-lock handcuffs, they do get tighter, creating the same effect as an Iron Claw. That is the “poor man’s iron claw”. That works too and imparts pain without necessarily breaking the wrist of the detainee.

In the case of the Iron Claw, resistance or pulling away from the officer holding it usually meant that the subject would end up with a broken wrist. I think that it was for that reason that they fell into disuse.