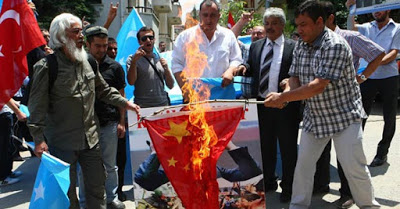 Xinjiang has been the site of murdered Chinese police officers off and on for the last two decades as the Religion of Peace tried to take control of the region from the national government. The Chinese reaction was predictably harsh because “harmony” with the Party is important in China. And if you’re not harmonious they will always find a way for you to see the light. Political correctness is defined in that way in the worker’s paradise.

This year, Chinese authorities again banned Muslim Uighurs in Xinjiang in western China from observing Ramadan. Workers and students may not fast at work or school or engage in other displays of Islamic devotion. In one town, authorities held a beer-tasting competition.

Restaurants have been ordered to stay open in Xinjiang province, including those owned and operated by Muslims. Shops have been threatened with closure if they do not continue selling cigarettes and alcohol throughout the month of Ramadan. The ban on burqas and other female expressions of devotion that was imposed last year remains in effect.
The restrictions this year are similar to those ordered in Ramadan in past years. China tolerates religious and other forms of diversity only to the extent that they serve the interests of the communist party or the peoples’ republic.
The population of Xinjiang autonomous region is predominantly Muslim Uighurs (an ethnic minority), rather than Han Chinese. A low-level Uighur secessionist movement has survived multiple Chinese security campaigns to eradicate it. Nevertheless, tightened security measures and the crackdown on Islamic practices in the past two years have helped stabilize the region, which is China’s top priority.