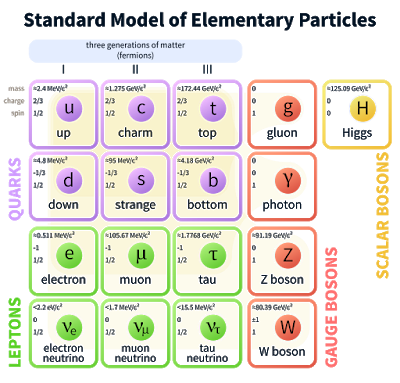 Particle Physics – the study of very small things and the mathematics that predicts them and how they make up everything is a hobby of mine and I’m not very good at it. The Standard Model lacks a graviton and possibly other particles, but the discovery of the Higgs boson at CERN laboratories in Geneva, Switzerland in 2012 is included and it’s one of the fundamental achievements in advancing the realm of Physics in the last 100 years.
These are the legos of the universe. Everything is made of them. Are there smaller particles? Strings but we’re still working on these. And while we’re not going to discuss string theory here if an electron (very very small) was the size of the Earth, a string would be a mote of dust) Neutrinos are so small and have such little mass that most of those generated in the core of the Sun rip through the planet Earth without encountering other mass and keep on going.
When I was in high school this chart didn’t exist and some of the current periodic table didn’t exist either. Never the less, everything we see, touch, taste or feel is made up of the particles in this chart. The starlight that pours from the heavens is comprised of them.
As a high school and college chemistry student, I was taught that electron shells were stable, and they are – sometimes. But now we know that sometimes the electrons that help make up everything (including electricity) are in “this dimension” and sometimes they are not. Of the ten theoretical dimensions that exist, three (X, Y, Z axis) are familiar to us. The others are not and comprise ‘weird science’.
Why do I even mention this in the blog? It’s easier to use simple math: Angle of the dangle is equal to the heat of the meat, etc. However I encourage you to dig deeper and think about how the universe really works. If for no other reason, it can be interesting.
That’s it, just sharing an interest at Planck Length.

The Planck length is the scale at which classical ideas about gravity and space-time cease to be valid, and quantum effects dominate.

We’ll go back to notions of good and bad government, power and petty machinations on the morrow.  But I’ll still keep my hobby, thank you.