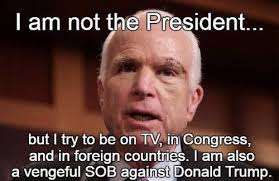 Facebook
Twitter
Pinterest
WhatsApp
August is ending and the past week has been a complete bust for me because I deal with DC to make money and that establishment has been almost completely consumed by the funerary rites of Sen. John McCain (R/D-AZ). It cost me a week of overhead and one of my guys is headed to Africa to deal with a problem without the preliminary problem being solved because John McCain died and DC is almost totally preoccupied.
The media loves John McCain — now. But if you pay attention, the only thing they really love about him is that he was the Republican who confirmed to Democrats that all other Republicans are everything evil the Democrats claim.

During his erratic and flawed run for the presidency, the same media who now praises him, smeared him with all the usual leftist smears — racist, sexist, ist-ist, etc. The media should not be getting a free ride to pretend they were ever fair about him. He was a tool to them, that was it. He was their “useful idiot”, a term Stalin used to describe Western intellectuals who repeated his lies without question. Don’t believe the tears.
President Trump is being petty. Sen. McCain’s last words were attacks on President Trump and other conservatives. His people didn’t even invite Sarah Palin, a truly petty break of protocol. Pettiness is a form of smallness of stature, usually smacks of venality and it speaks poorly of all who engage in it. John McCain spent a lot of his life being a vein bully. So in his death. He shouted, “but I was a POW” whenever he got into a bind. I get the same thing from people who want something beyond what they are entitled to by law because they are a veteran. Some veterans get carte blanch from me, but if you served chow at Lackland AFB for three years, not so much. John McCain wore his war wounds like a crown, and they gave him a career. I’m not saying that he did bad things all of the time, but he went out on a bad note and whether that speaks to the character of the man I leave to you.