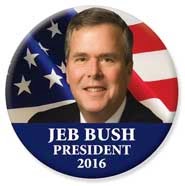 I am not going to go on the attack against a potential Republican contender for the presidency, but I want to ask why we need to scrape the bottom so hard in this instance. Yes, I know that he and his family can raise a zillion dollars — just like the Clintons can. Yes, he’d be a legacy president — just like Hillary would be.
Quite simply it makes me not want to vote. I will, but a Jeb Bush option is Clinton lite.
A friend of mine moved to Costa Rica and is putting some mild pressure on me to do likewise. Pull chalks and move. His reasoning, “No more US taxes to worry about, and let the liberals have the place lock, stock and barrel.”
The problem I have with the 2016 race that is shaping up is that I’m not overly enthused with any of the likely candidates – but of Republican hopefuls, Jeb Bush happens to be at the bottom of my list, right below the other closeted liberal, Chris Christie.