Passion for Fashion (thing for bling) 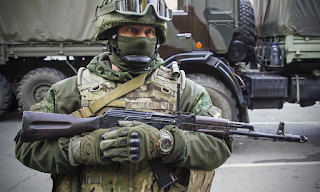 Facebook
Twitter
Pinterest
WhatsApp
“Why do Russian and Ukrainian soldiers always wear balaclavas?”
The balaclava, commonly known as the ski mask, originated in the Ukrainian town of that name during the Crimean War battle there in 1854. British troops wore the headgear to keep warm.

Later, in the Soviet Union, the balaclava was a standard issue uniform item for many units across the Red Army. Today, its use has spread beyond eastern Europe to police, SWAT, special forces and terrorist organizations around the world.
During the Irish War for Independence and “the Troubles”, members of the Provisional Irish Republican Army (IRA) wore balaclava masks to conceal their identities in the same way that ‘progressive’ protesters do on college campuses today. The easy way to deal with the situation comes from my roots. You kill anything with a mask. Later, when the area is clear,  you pull of the mask and photograph the carcass. It may not be strictly “fair”, but what is fair about war? Or war by other means?
By the time I began to phase out of pulling a trigger for a living, US Military people took to wearing Arab Arafat Shemagh Kafiyah Desert Style Scarfs. It was a gucci-style accessory and some Americans and Brits bought them on-line to be cool. It didn’t always work and at times they ended up dead and being photographed when the area was clear. Friendly fire can be a bitch, but when you think that it’s cool to look like the enemy – oops. Darwin award time.
French police do it now because up until recently, many had to turn in their firearms at the end of shift. If they were identified, the Muslims would terrorize their families. There is a solution to that sort of problem but the French opted for masks. Whatever, I guess that Charles Martel wore a helmet with an avontail with his helmet, though that was used for a different reason. 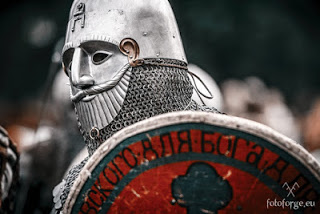 Back to Ukraine. The importance of wearing balaclava masks is tied to a fighting tactic the Russians have used for more than 100 years. This Russian military doctrine is called “maskirovka” and covers a broad range of military deception measures. Police in the US who work in undercover roles started doing it in the 90’s, then it caught on and became fashionable.
At its core, maskirovka is designed to sow confusion. A 1988 Pentagon study of the technique says “Maskirovka may be conducted in any environment to deny information to sensors.”

Writing for the Moscow Times, Michele A. Berdy states, “маскировка [Something masked] has a broader military meaning: strategic, operational, physical and tactical deception. Apparently in U.S. military terminology, this is called either CC&D (camouflage, concealment and deception) or more recently D&D (denial and deception). It is the whole shebang — from guys in ski masks or uniforms with no insignia, to undercover activities, to hidden weapons transfers, to starting a civil war but pretending that you’ve done nothing of the sort.”

Denial is one of the core tactics of maskirovka. Whether you’re a protester on a college campus or a terrorist running around somewhere you shouldn’t be, killing unarmed people for fun and profit. After the Russian invasion of Crimea in 2014, it was clear that Russian special forces (Spetznaz) had seized government buildings. But Putin gave a news conference the following day denying that Russian soldiers were in the country.
When journalists asked Vladimir Putin where the troops in Crimea came from, the Russian president answered, “There are many military uniforms. Go into any shop and you can find one.” With a straight face, Putin assured journalists that the “little green men,” as they have come to be called, were “local self-defense units.”