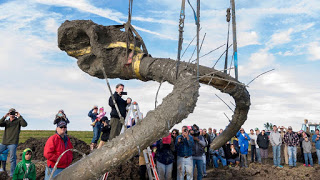 Facebook
Twitter
Pinterest
WhatsApp
‘Either you think, or else others have to think for you and take power from you, pervert and discipline your natural tastes, civilize and sterilize you.’ –F. Scott Fitzgerald, Tender is the Night.  “Progressives” have a difficult time thinking for themselves. They’d rather have the government do it for them. And what follows is predictable.

And today, I’m trying to fork off onto another path, the road not taken. No need to sully the electrons with AOC or the communists trying to take power. Not today. We’re half way to the weekend.

Mood Music… TUSK,  for the next piece.


Elephant, Mammoth, Mastodon: What’s in a Name?
There is a difference between a mammoth and a mastodon, even though their appearance was similar. Both animals were herbivores, but mastodons had cone-shaped cusps on their molars designed to crush leaves, twigs and branches. Mammoths, however, had ridged molars that allowed them to cut through vegetation and graze like modern-day elephants.
Over the decades, the bones of around 30 mammoths and 300 mastodons have been pulled from the state’s farm fields and construction sites. These giants browsed on vast open grasslands and in wooded valleys south of the ice sheets that buried much of Canada and the northern U.S. at the height of the last Ice Age, some 25,000 years ago. Yes, there is another ice age coming. Nobody knows precisely when. Some say that it is underway now. I can’t argue. I had snow at the White Wolf Mine in Arizona on Memorial Day. So stop burning fossil fuels and let’s get this party started. Mother Nature will bring the ice.
The Bristle Mammoth

(More Here) Among dozens of finds, this recent discovery captivated the public’s imagination. On October 1, 2015, scientists from the University of Michigan Museum of Paleontology had just one day to carry out the rescue excavation of a mammoth. Dramatic video captured the spectacle of a crane hoisting a massive, remarkably intact mammoth skull complete with tusks from a muddy pit in a farmer’s field near Chelsea, Michigan. The find was dubbed the Bristle mammoth after the name of the farmer, James Bristle.

Renowned mammoth expert Daniel Fisher of the University of Michigan has recently presented fresh evidence that Ice Age hunters were involved in the mammoth kill. Together with a preliminary radiocarbon date, that may put the find among the earliest convincing signs of humans in the Americas.

If the age is confirmed by further tests, the Bristle mammoth could be as much as 15,000 years old. That would put it long before the appearance of the Clovis culture, so named after the distinctive spear point first found at Clovis, New Mexico, in the 1930s, and long considered to be the hallmark of the First Americans. The discovery would join a half-dozen or so other North American sites that add up to strong evidence of a shadowy pre-Clovis human presence, promising to rewrite the earliest chapter in the peopling of our continent.

So when precisely did human beings begin to live in North America. Nobody knows, but archeologists are sure that they have the answer now… Were they descendants of marooned space men, and were lasers used to finish off the giant mastodons? Is there a cover-up? Ancient Alien Theorists want to weigh in on the answer before you make up your mind.
And what is the tie in with the newly acknowledged UFO’s – or whatever we’re calling them now? Yeah, nothing. I know.