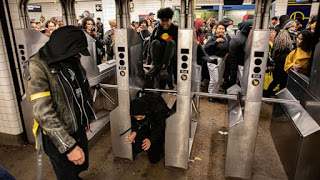 Facebook
Twitter
Pinterest
WhatsApp
BRING IT!
The Antifa people want the police to leave the New York subways for a day. I really like that idea. Actually it’s almost a wet dream. A law-free zone full of Antifa people. Open season, no bag limit, no legal repercussions. (more here) Give the mutants what they want. The police back out.
Allow Arizona’s armed citizens to deal with it without rules, without judgment. I know a lot of veterans who miss having live, non-human targets, to test out their new ammo loads on. The jihadis tend to avoid the Northern Arizona mountains and the Antifa goons are a lot like jihadis – close enough for government work, as they say.

I know, you’re saying, “LL they don’t want the police to leave the subways for just a day.” But it wouldn’t take longer than that. I’ll pack a lunch and take a break, but with a few friends and maybe some ammo bearers – just a day. Then NYPD can have it back. They’d need the fire department to do a wash down and meat wagons to remove the harvested Antifa people. But it would work.
Sure, the Democrats would need to recruit more Antifa people, but we could have a re-do. Think of it as stress reduction for frustrated veterans. Almost something that VA physicians could prescribe. We have physicians who visit this blog who might be willing to write prescriptions for Virtual Mirage blog readers to participate.
Jules Smith could bring her wolf, Lucifer. I’m not saying that if you have a mastiff or a wolf that they couldn’t join in the fun.
I’m certain that there are Virginians in need of target practice who would join the good people in Arizona in helping out the police.

(link) My solution is more cost effective – while being therapy.