Oil Drilling in the Spratly Islands 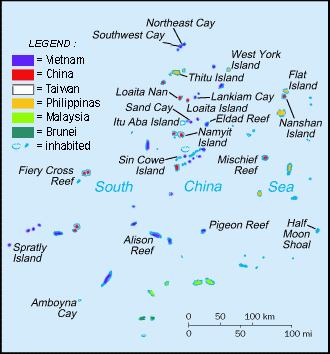 Facebook
Twitter
Pinterest
WhatsApp
The Chinese oil rig continues to drill for oil in the Spratly Islands and Viet Nam continues to be upset about it.
Meanwhile
US and Asian allied opposition to Chinese maritime claims has had the same effect on China that their opposition to Russian annexation of Crimea has had on its neighbor. Globalization plus a common border between Russia and China affords them the ability to work together to mitigate the worst effects of sanctions or US containment actions without changing their policies. At least that’s the move now in place.
The joint Chinese-Russian assertion that “there is no room for use-of-force scenarios” is risible. Russia used force in Crimea and China is using force in the Spratly Islands and the Senkakus. The rules have not changed. There will be more force used. It’s a form of double-speak where they want to make sure that the only force applied is the force that they (China and Russia) apply.

A Chinese foreign ministry spokesman said that the four ships China sent to Vietnam have evacuated 3,553 Chinese staff members of the China Metallurgical Group Corporation and other companies from the Vietnamese port of Vung Ang.

He said China earlier sent a medical chartered plane and two commercial chartered flights to Ha Tinh Province in Vietnam to fly back 307 lightly and badly injured personnel from companies that had been attacked.

Vietnamese authorities announced they indicted more than 750 people for their participation in anti-China violence.

All of the Spratly Islands are claimed by China but theirs is not the only claim. Take a look at the map and who feels what is ‘theirs’. It’s not so much as the islands as the oil field that is under them. The first one to suck up all of the oil wins.

Everybody wants a piece of the oil-drilling pie. China would like to eat it all, naturally. They’re Chinese (and thus they are celestials) and feel that the oil is all theirs as a matter of racial preference.