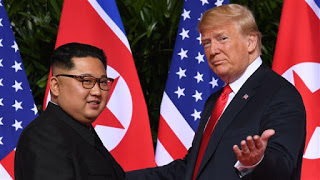 At their first handshake, Kim told President Trump, “It was not easy to get here. For us, the past has been holding us back and old practices and prejudices have been covering our eyes and ears, but we have been able to overcome everything to arrive here today.”
At the end of about four hours of meetings, President Trump and the North Korean Chairman signed a document on broad principles of agreement. It opened with an affirmation that President Trump and Chairman Kim Jong Un “held a first, historic summit in Singapore on June 12, 2018.”

“President Trump and Chairman Kim Jong Un conducted a comprehensive, in-depth, and sincere exchange of opinions on the issues related to the establishment of new US-DPRK relations and the building of a lasting and robust peace regime on the Korean Peninsula. President Trump committed to provide security guarantees to the DPRK, and Chairman Kim Jong Un reaffirmed his firm and unwavering commitment to complete denuclearization of the Korean Peninsula.”

“Having acknowledged that the U.S.-DPRK summit – the first in history – was an epochal event of great significance in overcoming decades of tensions and hostilities between the two countries and for the opening up of a new future, President Trump and Chairman Kim Jong Un commit to implement the stipulations in this joint statement fully and expeditiously. The United States and the DPRK commit to hold follow-on negotiations, led by the U.S. Secretary of State Mike Pompeo, and a relevant high-level DPRK officials, at the earliest possible date, to implement the outcomes of the U.S.-DPRK summit.”

The primary significance of the summit is that it occurred. Both leaders wanted to be the first. In meeting the US President, Kim has surpassed the achievements of Kim Il-sung and Kim Chong-il. Both men have established a place in history.
The emergence of the document above implies preparations and exchanges about appropriate for a half-day summit. Some of the language is lifted from public statements by Kim or from President Trump. Other language is from the Panmunjom Declaration, which is cited.
Style
Many commentators from the corrupt, smug, sly, lying elite media in the US have criticized the summit style. There are at least two summit styles.
Since World War II, the dominant style has been for the summit meeting to be the climax of weeks of work. This opens the negotiations to input from all sort of experts.
The Singapore summit conforms to an older style, that of strong rulers – kings/kaisers/emperors/despots — of the past. Great kings had the option to establish the principles or the framework for an agreement and then set their bureaucracies in motion to execute the details.
In the older style, the experts have only limited contributions to make to the summit preparations. They still have important contributions, but to the implementation phase of the agreement. Both styles work.
Security and pressure. One of the advantages of the great king style is there are no premature leaks. Plus, there is no time pressure to achieve results before the leaders meet.
Severability. Another advantage is that differences over the details do not necessarily rupture the overall agreement.
Flexibility. Another advantage is that the great kings have the flexibility to intervene to break deadlocks. The important point is that there is no single path to a useful agreement.
Iran-North Korea
Iranian Foreign Ministry Spokesman Bahram Qassemi urged North Korea to enter the planned talks with the United States with “full vigilance”, ISNA news agency reported on 11 June.

“Given the history and the history of the behavior we know from the United States, especially those of Mr. Trump, who during his term of office has committed obstructions, withdrawal from agreements, and violations of obligations, especially with regards to the JCPOA (the Iranian nuclear deal), we do not hold an optimistic view on this issue, and we believe that the Korean government should deal with this with full vigilance, since one cannot judge the nature of the American leadership with optimism,” Qassemi said during his weekly press briefing in Tehran on 11 June.

“Iran’s position is clear…, we are interested in peace and stability in the Korean Peninsula, as well as in other parts of the world, and we will welcome every step in this process, as well as the economic development and prosperity of that region,” Qassemi said when asked about Iran’s stance on the upcoming US-North Korean talks in Singapore.

The Iranian statement contains no surprises. However, Iran is watching closely, because THEY are interested in an agreement themselves. As Iran ramps up it’s capacity to build nuclear weapons, Israel acquires US F-35 stealth strike aircraft, and the Saudis have committed to buy/build their own nuclear weapons in an effort to remain parity with their hereditary enemies. With the North Koreans crafting a deal that may be enduring with President Trump, there is a light with Iran that was not there with the bumbling, craven ObamaNation. Maybe there is a way for them that doesn’t end with the Persian Empire turned into a sea of radioactive glass.
I know that there are blog readers who won’t agree with me that Iran sees an opportunity for a genuine deal, but (with respect) you’re wrong. How to craft such a deal on the repudiation on the horrible situation with Barack Obama’s ‘sell out’ that the whole world now sees clearly, is a task for them.