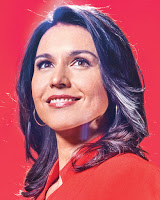 Facebook
Twitter
Pinterest
WhatsApp
Tulsi Gabbard
As the least objectionable Democrat in the crowded field, you may be asking yourself whether or not Tulsi Gabbard is genuinely pushing for nomination on the Democratic ticket. Sure, she’d take it, but by running, she’s creating name recognition where there was none, and will be trying to position herself for 2024 or 2028, after the Trump Era. It’s an effective strategy and may help her gain the US Senate for Hawaii in the interim.

For now, she’s not enough of a collectivist to gain the imagination of the progs. It’s true that she’s a woman, but she’s not a lesbian. She was born in American Samoa, but liberals claim that she’s not Samoan enough — and most of them have no idea where Samoa is. Clearly there aren’t enough Samoans out there voting to make a difference, so she represents an insignificant grievance group, unlike Obama, who was famous for being half white – or half negro, depending on how you look at it. She served in the US Army in a combat theater, which puts her in the same lane as Mayor ButtGuy – claiming that it has prepared her to be commander-in-chief.
I don’t know if anyone has noticed, but she looks a lot like comedian Julia Louis-Dreyfus, who portrays a politician in the series Veep. Is life poised to imitate art (again)? I don’t know, I’m just asking the question.
Adventures in Nork-Land
The North Koreans release rants directed at the US every few days, and I don’t expect that you read them. I don’t know that I’d read them but for the production this blog.
North Korea shares a close, long term relationship with Syria and Iran (you should not be surprised). They are under an “80% sanction environment” and took note that the US just slapped 100% sanctions on Iran. That bothered them and I think that’s cause for the rant.
The North Koreans are not happy that the world does not view Dear Leader (the fat kid with the bad haircut) as a genius. Lack of fawning, mawkish respect for Dear Leader can lead to execution in the Hermit Kingdom.
Official US statements characterize Chairman Kim as an oriental despot who heads a brutal regime. North Korea continues to engage in a wide range of dehumanizing, criminal activities. To us, it’s simply the case. They understand the reality but chose to reject it. Even if the leaders meet again, bilateral relations and denuclearization will be difficult if not impossible. They want to keep their nuclear weapons and to keep creating more. China is trying to put a wet blanket on that activity but their efforts seem to be scorned privately, while putting a happy face on Dear Leader’s meeting with President Xi last week.