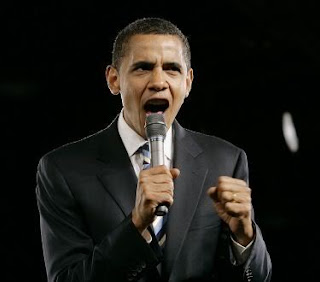 Little Barry never won an award in school. He wasn’t the fastest, he couldn’t jump the highest and he certainly wasn’t the smartest. Fame and awards alluded him. He was angry (see left)!!

However that never stopped our favorite narcissist. He became Barack HUSSEIN Obama. And while the allusion to the first Imam of Islam was appealing, there was no bling to go with it…until he became President. Then he trotted off to Saudi Arabia where King Abdullah dutifully draped a gold chain with a medal attached around his neck in an expression of appreciation for his…election. See, Barry did something no other half black person ever did and he received a medal for it.

And as nice as the Saudi medal is – complete bling and purest gold, he still wasn’t anywhere caught up to the competition (see below) because you can’t be a proper potentate without a lot of medals. No matter that you didn’t earn any of them and in fact either bought them or awarded them to yourself. They look good. His latest award, the Nobel Medal for keeping the peace during the first week and a half of his presidency, will be yet another bauble he can strut about in his never ending quest for parity with Gaddafi (Libya), the late Doctor and President-for-Life Edi Amin Dada (Uganda), Party Secretary Leonid Brezhnev and others of their stripe.
One Question –
Is the medal as sweet when you buy it as it is when you earn it? Barry – can you weigh in on this discussion and let us know how it feels? Oh, never mind. You haven’t earned anything. How could you possibly respond? Keep on sending out the bribes for medals because you’re way behind Col. Gadaffi – who by the way told us in the UN last week that he’s happy you’re the US president. It seems you have a lot in common.
__________________________________________ 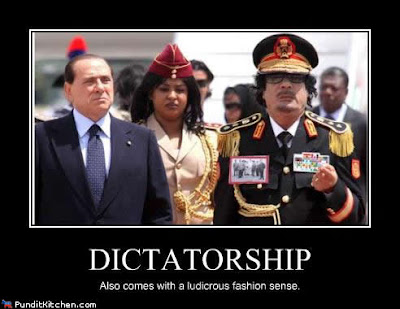