Oasis of the Seas

When I first heard the keel had actually been laid down for this monument to hubris, interestingly named SS OASIS OF THE SEAS, I wondered if the Royal Caribbean Cruise Line stockholders and board of directors were mad. I marveled that anyone would underwrite a project such as this. But when you consider the sub-prime loans that have more or less ruined the American (and world) economy for a generation, perhaps we should not be surprised. 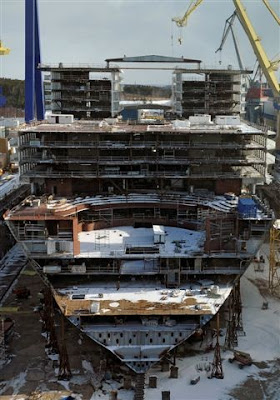 under construction in Finland
Then I learned that there was a second hull laid down for the SS ALLURE OF THE SEAS. My initial reaction that somebody, somewhere was insane had been confirmed. The phrase “more bucks than brains” leaped to mind.
These sea-going hotels are significantly larger than a US Nimitz Class Aircraft Carrier and are expected to haul over 6,000 passengers in 16 passenger decks as they float around the Caribbean. A crew of 2,100 will see to the needs of those fare-paying passengers. The price tag of the two floating hotels is over $3 billion.  Each ship boasts 21 swimming pools and a kid’s water park. The ship’s 1,400 seat theater will feature water shows and Broadway musicals.
Now the Oasis of the Seas is nearing completion. I wonder if they’ll be offering deep discounting to get people to spend their vacation bobbing up and down in this massive floating hotel on the ocean? In a financial climate where austerity seems to be the watchword, the pleasure palaces may be out of place – monuments to run-away economies. 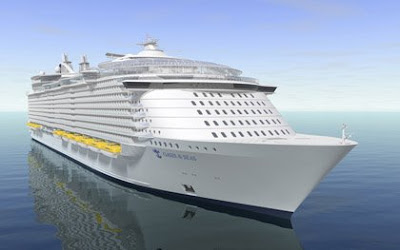