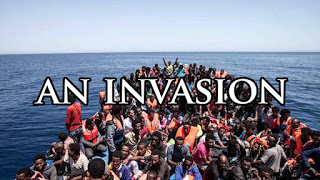 Facebook
Twitter
Pinterest
WhatsApp
Remind me how many Syrian refugees were allowed into Saudi Arabia.
That’s right, I remember now. The number is 0 and it begs the question, what do they know that we don’t? After all, the Syrians are their fellow Arabs.

A British view
America has been concerned with the Muslim migrant crisis both at home and because we see it chewing up our allies. The British took the BREXIT step to change the situation. Other Europeans see rise of populist leaders amid anger over economy and the  migrant crisis

Italians will vote this coming Sunday on a series of sweeping reforms, the outcome of which could determine the future of Prime Minister Matteo Renzi’s rule – but also serve as a gauge for the rising populist movement throughout Europe.
If Italians reject the reforms – which are basically an unofficial plebiscite on the prime minister – Renzi has vowed to step down, setting up a caretaker government and the chance for the populist comedian-turned-politician Beppe Grillo’s Five Star Movement to take power in the next election. Some ask whether a comedian would make a good leader. Others contend that anyone but a career politician is a step in the right direction.

The catalyst for change is Muslim savages from Africa and the Middle East, which the Italian government are allowing to remain with an open door policy. WHY (I hear you cry)? The answer is that I don’t know. Europe/NATO can build safe spaces for them in their filthy sewers-style cities back home. They can give the savages Bibles and toothpaste and set up tent cities.

Italy’s situation is a microcosm of what is happening across Europe, where the political establishment is being challenged by a slew of conservative populist politicians, who are riding the same anti-establishment anger that earlier this year saw the United Kingdom vote to leave the European Union and the United States elect Donald Trump as president.
Mirroring both the campaigns of Trump and Sen. Bernie Sanders in the U.S., Grillo and his Five Star Movement have gained a large number of followers by harnessing Italian anger at political elites and frustration over slow economic growth. Unlike his fellow populists throughout Europe, however, the ideologically-elusive Grillo has not played into national identity politics the way that more conservative leaders in places such as France, the Netherlands and Austria have.
France, Austria Germany and the Netherlands are also poised for a shift from liberal policies to more conservative approaches to — just about everything. The migrants lighted the fuse and now we simply need to watch it play out. The question of whether those nations are willing to save themselves from savages has yet to be determined.