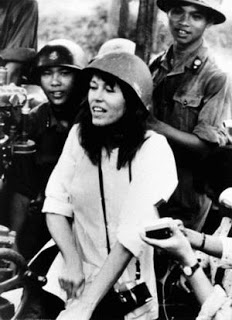 This isn’t so much of a movie review in the sense that I usually do them.

I won’t be viewing Jane (Hanoi Jane) Fonda in her role as First Lady Nancy Reagan in the feature film, “The Butler“. Whether anyone who reads this blog does or does not see the movie is frankly irrelevant to me. I’m much younger than Fonda but I still recall Hanoi Jane in her glory days and feel that supporting any film project of hers is the same as condoning what she did during the Viet Nam War and what she has done since.

(Fox News) When Jane Fonda was cast as former First Lady Nancy Reagan in Lee Daniels’ forthcoming film “The Butler,” some Reagan fans were not pleased. Now, with the biographical due to hit theaters in October, a movement to boycott the movie is gaining some momentum.

Larry Reyes, a Navy veteran and founder of the “Boycott Hanoi Jane Playing Nancy Reagan” Facebook page has been particularly vocal about the casting decision, given Fonda’s past frolicking with the enemy during the Vietnam War.

This week, Fonda had a simple message for Reyes and the page’s fans. “Get a life.”

I haven’t bounced through the Internet to Reyes’ Facebook page so I’m not sure precisely what he said beyond the Fox News article, however I feel that Fonda’s conduct as a propaganda tool of a nation we were at war with (declared war or not) constituted treason. There were a lot of people who protested that war. There were a lot of people who disagreed with the war privately. Fonda, a high profile public figure, used her status to advance the war against America in favor of North Viet Nam.

Time has passed. In 2005, Fonda (now near 80 years old) said that she regretted her behavior, sitting on an anti-aircraft gun, simulating shooting at US Aircraft, and calling Americans, “war criminals”. Maybe that passes for an apology. I still don’t plan to see the movie.
The Democratic Party’s financial scion, Harvey Weinstein, who produced “The Butler”, is thrilled with the attention that Hanoi Jane is getting because he must feel that more people will then go see what he created. I doubt that will be the reaction, but we will have to wait and see if the shock jock hatred that Weinstein and friends feel toward the Reagan era will translate into financial success.
Recommendation: DON’T SEE IT