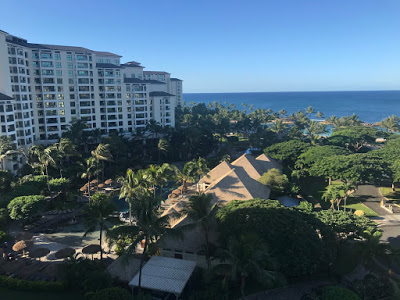 Good Morning Oahu!
This is the early morning view from the balcony. It’s not unique, because this is the morning view from the balcony almost every day. We’re in week two in Hawaii while I am homeless, waiting for construction at the White Wolf Mine to be complete. I’m advised that it will be finished before Christmas.
All I can tell you is that while the general contractor can’t be relied on to do things in a timely way, it is getting closer (as is Christmas). Meanwhile, I am making do as best I can.
The conclusion of the Van’s Triple Crown of Surfing will likely be played out tomorrow and I’ll be there at Sunset Beach to watch the action.
Work still requires that I be on the phone two or three hours a day, but I’m living with that…again…as best I can.
In Paris, the French riot police took off their helmets and refused to subdue the crowd because they identify more with the people than with their elite masters. There comes a point in time when taxes get too high. Macron and his backers (bankers) need to review the situation and consider that the police are the canary in the mine.
In Mexico City, President Lopez-Obrador is assuring the cartels that he has their back and that the police and defense establishment (SEMAR and SEDENA – Navy and Army, respectively) will no longer target drug kingpins nor their empires. Many Mexicans believe that the narcotics problem is a consumption problem in the US that shouldn’t touch their daily lives. The PRD or communist party, has never taken power in Mexico before and everyone is hanging back to see how things will work out.

The Party of the Democratic Revolution (PRD) is a socialist/collectivist political party that has been one of the three major political parties in Mexico over the last several decades, the others being the Institutional Revolutionary (PRI) Party and the National Action (PAN) Party.

The hand grenade attack on the US Consulate still have many in the US State and Justice Departments concerned. The bottom line is that Mexico is not safe for US Government employees or tourists who visit Mexico. The nation loves the money that it brings, but can’t guarantee much. The narcos own many of the hotels and resorts that Americans visit and try to keep things safe because they have a financial interest in the outcome. And still, it just isn’t safe.
In The Koreas
On 1 December, a North Korean soldier defected to South Korea across the eastern land border.
Additional information will become available, but the timing of this defection during a period of reconciliation raises questions about what North Korean soldiers are being told. Why would a soldier choose to defect during a time of eased tension and unification moves? Why have more soldiers not defected? What is the content of the daily indoctrination sessions that soldiers must attend?
At this point there are a lot more questions than answers. At the same time South Korea is moving ahead with reconciliation moves and North Korea is letting them pay for it.
In China’s Pacific Ocean Domain

The guided-missile cruiser USS Chancellorsville sailed near the Paracel Islands on 26 November to challenge China’s “excessive maritime claims”, the US Pacific Fleet said in a statement.
China foreign ministry spokesman, Geng Shuang, told a daily news briefing the US ship entered Chinese waters without permission and China had made its position known with its “stern representations”. The Peoples’ Liberation Army’s Navy said it sent ships and aircraft to watch the US ship and to warn it to leave.
This was the second of three US Navy ship transits of waters that China claims in a week. Chinese reaction was restrained in advance of the G-20 conference in Argentina. The US cruiser conducted the freedom of navigation operation near the Paracels after departing Hong Kong.
Two days later, on 28 November, the guided-missile destroyer, USS Stockdale, and the naval oiler, USNS Pecos, transited the Taiwan Strait. China was outraged as usual. The Taiwan Strait is 130 km/81 miles at its narrowest point. That means ships can transit the Strait and remain in international waters as defined by the UN Convention on the Law of the Sea. Warships are under no requirement to make the transit under conditions of innocent passage.