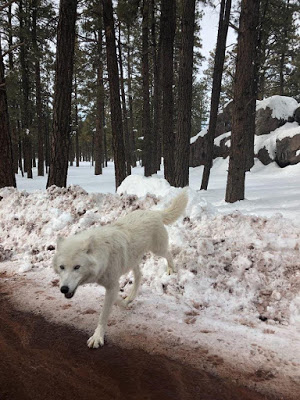 A person recently e-mailed me and asked me whether or not there were any white wolves at the White Wolf Mine. You be the judge. He’s not covered in gore from his latest kill, more’s the pity. The wolf is fastidious by nature. Maybe he doesn’t want his camouflage scheme messed up?

LSP, he’s not holding a Chinese menu in his paw – not a British wolf. Even so, if you run into him, don’t fear the reaper.

Dark Side of the Moon (the album)
I’ve been listening to Pink Floyd since the above captioned album came out. I was in Scotland (a serving American officer) when I first heard it. There was a lot of music in that era like Thin Lizzy that I listened to and I still like it. Yes, it dates me. I mentioned Metalica to a friend the other day and — uh, I guess that dates me too.
BREXIT
The British elites are calling for another vote. And if they don’t get the results they want, they will call for still another vote. Elites are like that everywhere. They wanted another referendum on President Trump vs Crooked Hillary in the hopes that the results would change (maybe change the way that votes were counted – it’s working very well for Democrats).  They are your betters and feel that they deserve to rule. Will Britain stay in the EU so that millions more military age Muslim men can pour across the border to make the nation more Sharia compliant? I guess that it’s up to the Brits.
Picking on the Tommys 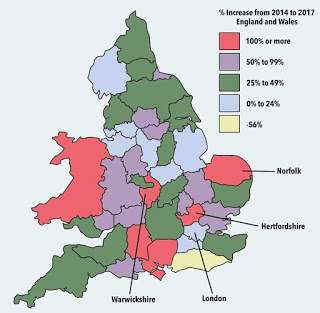 (LINK) The knife crime epidemic spreads farther across the island and the national response has been to ban knives rather than to deal harshly with the people who sink them into their fellow Brits for fun and profit.
The US has a gang problem too. The solution is to cage them for the rest of their lives. And it works, but it’s expensive. Texas executes murderers (God bless Texas) to send a message.
And to my point…the parts of the country where citizens can carry what sort of firearm they want, as they are moved to has shown a severe downturn of violence and little or no knife violence.
Though the map doesn’t show it, the increase of knife crimes is directly proportional to the rise of Muslim gangs. It’s literally illegal to say that or publish figures in the UK. Crime will increase. Good luck Old Blighty.
(h/t John D)