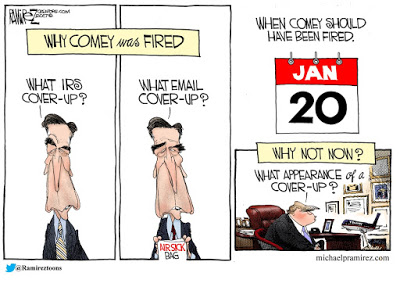 Facebook
Twitter
Pinterest
WhatsApp
On the whole, I used to watch the news on television. My preference was for Fox Business or the Fox News Channel. There’s not a lot of news there. Most of it is 24 hour cycle cable commentary with endless points and counterpoints.
Now, not so much. There’s not much to learn.

James Comey disgraced the FBI’s reputation, such as it is. The Democrats are running a clown circus and their subsidiary elite, lying mainstream media makes a mockery of politics in general.
If Donald Trump were to run against Hillary Clinton today, polls say that he would beat her all over again – but the shrill sometimes lesbian former candidate is back on the trail again. It’s difficult not to tire of all of this.
President Trump is not a particularly good politician. However his political agenda of returning power to the States and to the people with deference to the Tenth Amendment is admirable. To the extent of what he’s doing on a daily basis, he’s pretty good. The silly tweeting and posturing even in the face of the smug, nasty, lying media is not necessary. In fairness, the deep state is not at all pleased with the president and wants to see things go back to the way they were. On the flip side, President Trump doesn’t seem to be able to take a drink of water without his ‘loyal’ staff leaking it to the New York Times or the Washington Post.
Just because you’re paranoid doesn’t mean that they’re NOT out to get  you.
My profession calls for an updated view of the world, so I look well beyond the American media (generally a joke) to try and ferret out kernels of truth from the clutter. Thus, I share some of these thoughts for the potential benefit of people who drift through this blog.

The Russian plan to de-escalate the war in Syria seems to be working. It also is beginning to transform the Syrian civil war. A joint working group on implementation is to be established this week.
Turkey said it was offered the responsibility for monitoring the largest zone, which is Idlib Governate. The Turks contended that the Sunni Muslims in Idlib are close in culture to the Turks. The plan envisions Turkish Army units deploying to Idlib to keep the peace. The Assad government is likely to oppose a continued Turkish troop presence in Idlib, even with a UN guarantee that they will depart. They worked to depose Assad and he will keep that in mind.

Responsibilities for the other areas are still being worked out, based on the dominant rebel group in each zone. The dominant group in Idlib is one that Turkey supported in fighting the Assad government.
In northern Syria, the Syria Democratic Forces (SDF) announced that they would transfer control of Tabqa to the city council. The Syrian Kurdish People’s Protection Units (YPG) announced that they would make the transfer after the remnants of the Islamic State were cleared.
The SDF has made additional gains against the Islamic State fighters in offensive operations northeast and northwest of Raqqa. US -led coalition airstrikes support the offensive.
The plan essentially will cantonize Syria. If it works and endures, Syria will de facto become a federal state. Russia, Turkey and Iran are making the important decisions. However, there is little reporting of Iran’s attitude towards the plan. My sense is that (1) they would like to see a larger role for themselves and (2) they will work internally to replace Assad with a radical Shiite eventually. It’s a waiting game that they can play
The sixth round of UN sponsored, “intra-Syrian” talks convened on 16 May in Geneva. The Kuwait News Agency reported that the agenda will cover transitional rule, drawing up a constitution, elections and counter-terrorism.
Now the Onion
The parties do not agree on the definition of the terms, For example, the rebels’ idea of a transitional government means a government without President Assad. The Russian idea allows Assad to remain in power, but with rebel influence channeled through the other agenda items. The Iranians have no interest in strengthening the political clout of the Sunni Muslims at the expense of the ruling Alawites, who follow a sect of Shi’ism. The Turks consider the Syrian Kurds terrorists. The Russians do not.
The USA
The US program under President Trump is less concerned with Syria internally and more concerned with eradicating ISIS in Syria (and elsewhere). During the eight years of the Obama Administration, the USGOV was hard pressed to keep its word — anywhere. The Russians, in particular, found America impossible to cooperate with for this very reason.
The US Defense Budget exceeds that of Russia and China combined and it will be growing under President Trump. Recommitment by NATO countries to spend more on defense further makes the US something to be taken seriously. How and where the US choses to use its military clout is an issue that is discussed in foreign capitals as the philosophy slowly changes with the departure of Obama’s factotums and the arrival of Trump’s.
President Trump’s first foreign visit will offer him some relief from the relentless pounding by the corrupt, elite media.