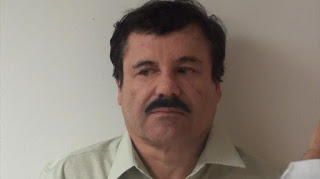 Facebook
Twitter
Pinterest
WhatsApp
Joaquin Guzman Loera (El Chapo) has not done well since his escape from Amaloya Prison. He still has a dozen wives and God only knows how many children, and he “had” a high overhead with all of his properties and business enterprises. But that’s not what drove the man. He wanted to be loved and respected.
By the time he was arrested this week, he’d seen his kingdom shrink. The only ally he’d been able to draw into his post-escape empire was the Tijuana Cartel (Arellano-Felix Organization), which has been far more than decimated in recent years and is only a shadow of its former self. Chapo could no longer ride around on American-made helicopters, given to Mexico and the Mexican Army for the purpose of fighting the drug war. Things changed for him.
I thought that he would retreat to his vast holdings in Canada or elsewhere in South America where he owns large estancias (ranches), but it was more important for him to be Chapo than to live out his life in peace. He hung out and was seen in Guadalajara. When pressure was applied, he moved to the mountains east of Los Mochis in Sinaloa where he has several facilities. Then it ended for him.
My sense is that he will be extradited to the US and will live out the remainder of his life at the SuperMax Prison in Aurora, Colorado.
A number of the other older narco kingpins have remained in the business, but you must understand that most of these people/organizations make as much or more money in ‘legitimate’ commerce than they do in the drug trade. This became even more the case after the 2008 financial melt-down that struck Mexico every bit as hard as it did the USA. Drug lords, flush with cash, bought businesses that were going under for pennies on the dollar.
As I presently understand it, Juan José Esparragoza Moreno (El Azul) plans to move out of the drug business completely and will buy up much of the Mexican national petroleum company, PEMEX, which is transitioning from a publicly owned concern to a private one. There will be fronts and wheels within wheels, but it’s a better gig than kingpin from an economic standpoint. El Azul was always smarter than Chapo.
Most of the kingpins moved their families to San Antonio, Texas, which has experienced significant growth in recent years. San Antonio is a straight shot from Guadalajara, Jalisco. They don’t caper in San Antonio, they live there.