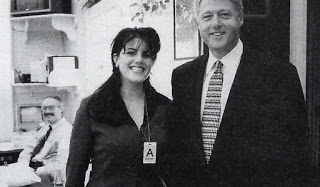 Facebook
Twitter
Pinterest
WhatsApp
Long before Salome petitioned Herod* to behead John the Baptist after dancing particularly well for him, there has been this push and pull between men and women.

* The Jewish historian Flavius Josephus relates in his Antiquities of the Jews that Herod killed John.

The Harvey Weinstein scandal is only the latest, and while many felt that the story would die naturally, and quickly, it has not. It’s not unlike the late pop singer Michael Jackson paying parents of the children who he molested…the hits kept coming.

(Washington Times) She didn’t name names, but when Monica Lewinsky joined the viral online campaign against sexual harassment Sunday by retweeting #MeToo, the first person who came to mind was President Bill Clinton.

Therein lies the problem for the Clintons with the Harvey Weinstein sexual-harassment scandal: It hits perilously close to home.

Not only was Mr. Weinstein a political ally and a major donor to the Clintons and the Clinton Foundation, but his alleged sexual misconduct has refocused attention on Mr. Clinton’s own checkered past as the tide turns against powerful men who take advantage of women.

To me, it was not the trade of money for sex** that Ashley Judd, Madonna and other women engaged in with Harvey that will get him. It will be the stories of the no-name women who were lured to Harvey by famous and powerful women (many who wore their pink cat hats with pride more recently in hatred of the President). If those come out and I think that they will, it will be a far darker saga both for Harvey and for the Clintons, who one would think could not sink lower than they already have.

In order for a defendant to be prosecuted of engaging in an act of prostitution the prosecutor must be able to prove beyond a reasonable doubt that the defendant did in fact engage in sexual intercourse or sexual services in the exchange of money. Engaging in prostitution can either mean the act of sexual intercourse or lewd acts; lewd acts include anything that is intended to deliberately arouse another.

The women who did not prostitute themselves, but were lured by Weinstein and raped are a different class of victim and the sentences which may be paned down are far more severe and could put Harvey in prison for the remainder of his life. That also applies to the famous women who engaged in a conspiracy to commit rape by luring young women to Weinstein.