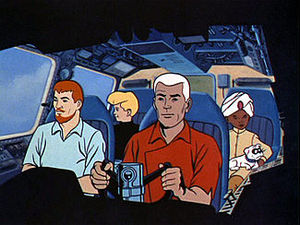 When I was a kid my favorite cartoon (ok, it tied with the Road Runner) was Johnny Quest. In the video clip below, Joe Barbera talks about his vision for the series and about how it all began in the 1960’s.

They had very cool gadgets, the adventures had a flare of realism. There were underwater habitats, advanced aircraft and different venues and I never tired of Jonny Quest. The cartoon became one of the main targets of parental watchdog groups such as the radical liberal organization, Action for Children’s Television (ACT), for its multiple onscreen deaths, murder attempts, use of firearms and deadly weapons and tense moments. Reruns were taken off the air in 1972, but returned to Saturday morning, in edited form.

Yes, I could turn this to a rant against political correctness and liberal whackos, but it wouldn’t do any good. All of the episodes are on YouTube and you can watch them there in their original form – as you can with Road Runner cartoons. I really don’t understand it at a gut level, but liberal activists really enjoy taking fun out of everything. My response (as a young man as now) is to tell them to go to hell. Then again if you were politically correct, you wouldn’t be reading my blog.