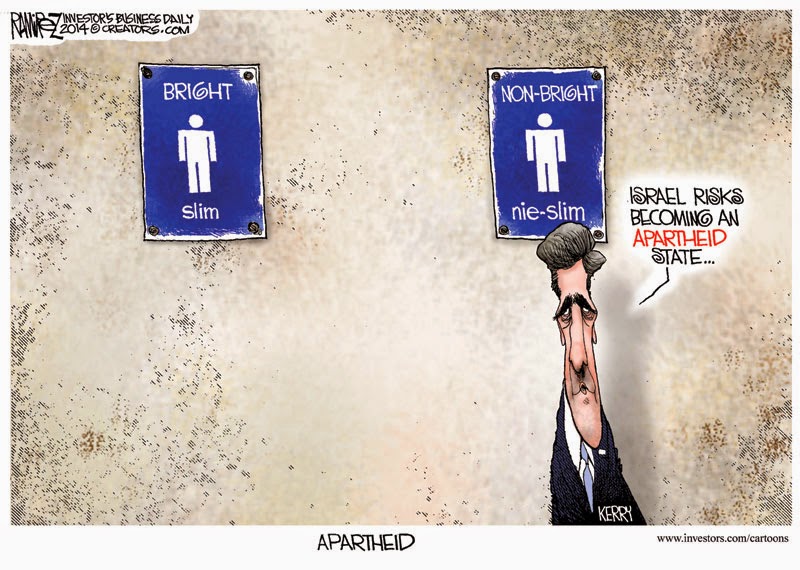 Facebook
Twitter
Pinterest
WhatsApp
There has been a lot of discussion about SECSTATE John Kerry’s remarks about Israel, however I haven’t seen much push back with any detail. I may simply not get out much and have missed it,  but thought that I’d throw my cracker in the soup.
There are no Jews holding public office in Arab countries. Does anybody other than me find that ‘curious’? Does the lack of Muslims in high places in Muslim countries and the denial of any but Muslims men to vote constitute apartheid? Think about it.
Apartheid holds that all people are not equal under the law. Under this philosophy, one would not expect non-Jews to hold important public office in Israel – if Israel was an apartheid state as Secretary of State John Kerry asserts.

We all know that Kerry is an insufferable, boorish, blow-hard of a man with very limited intellect, no shred of honor and that he fits very nicely in Hillary Clinton’s shoes as her successor as US Secretary of State in the Obama Administration.

Arab citizens of Israel have been elected to every Knesset and currently hold ten percent of its seats. Hussniya Jabara, a Muslim Arab was the first female Arab MP, elected in 1999.
Abdel Rahman Suabi was the first Muslim Arab to serve on the Israeli Supreme Court (1999). Salim Houbran, a Christian Arab was the first Arab to hold a permanent term on the court (2004).
Non-Jewish Israeli Ambassadors include:
Arab leaders in the Israeli Defense Force:
Major General Hussain Fares (Commander of Border Police)
Major General Yosef Mishlav (Commander of Home Front Command)
LTC Abd el-Majid Hidr
Inspector General Jamal Hakroush – Israeli Police
It doesn’t sound that apartheid to me…