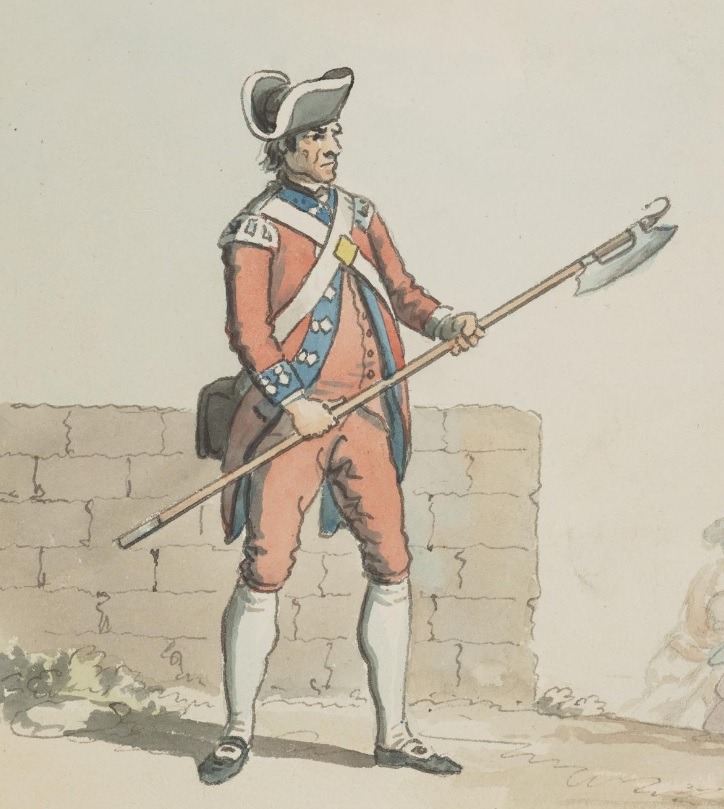 (above) A soldier of the Edinburgh City Guard, 1785, armed with a Lochaber Axe.

The Lochaber Axe (Gaëlic: tuagh-chatha) is a type of poleaxe that was used almost exclusively in Scotland. It was usually mounted on a stout staff about five feet in length. It was in the same class of weapons as the halberd, voulge or bill, and combined different useful characteristics in an age when muskets were expensive, Scots were cheap, and the Lochaber Axe would do the job. 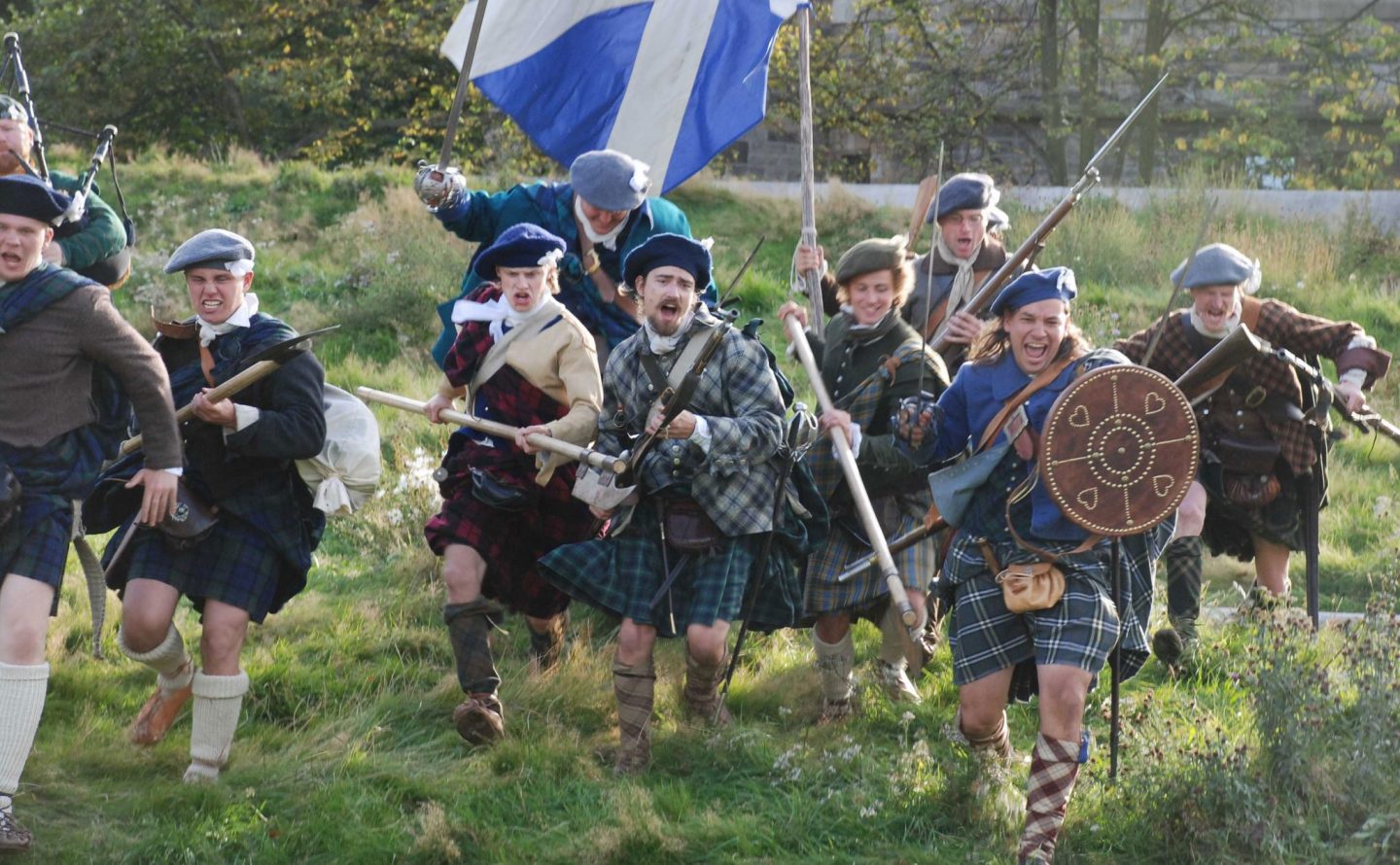 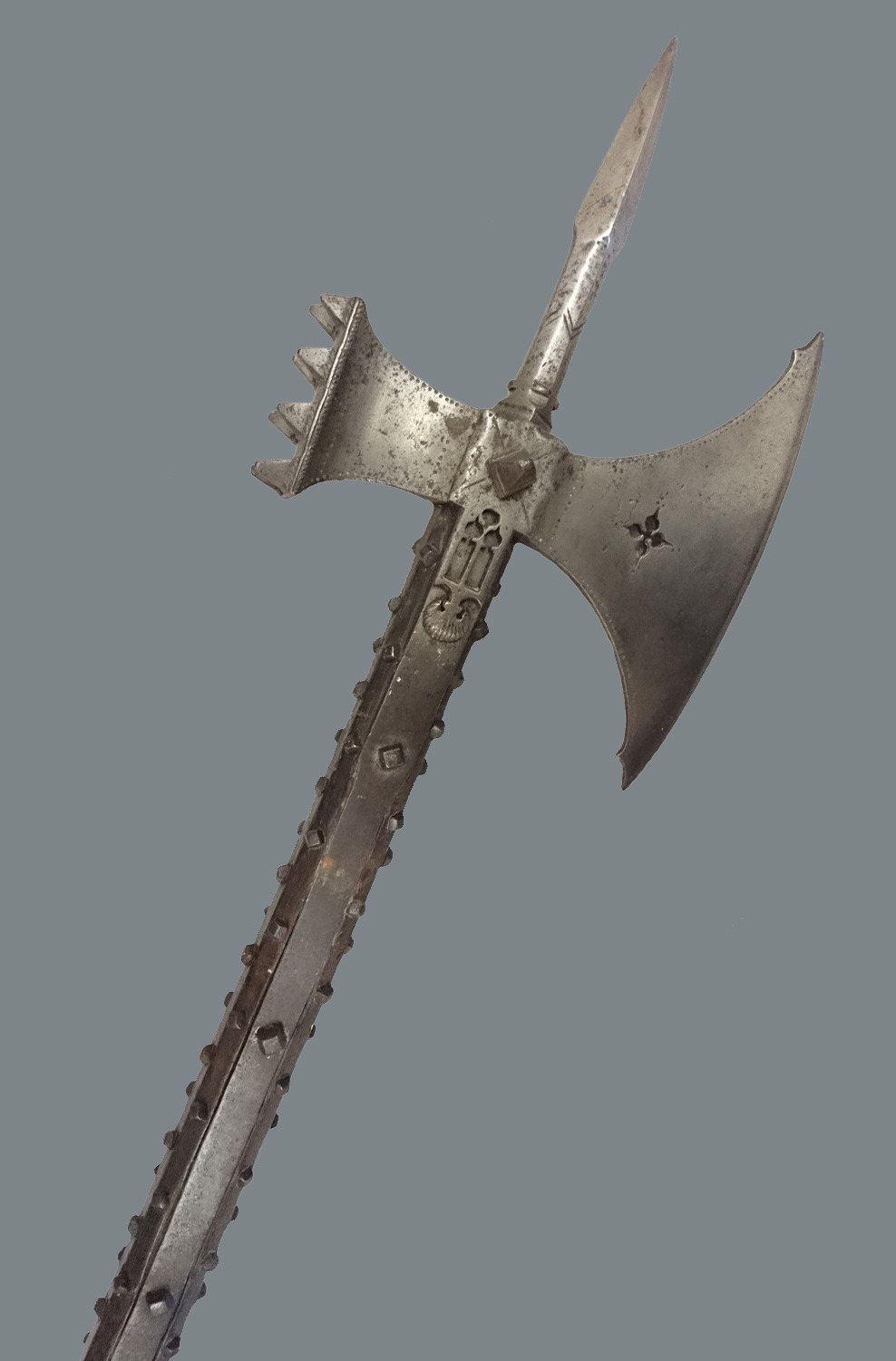 For comparison, a classic medieval poleaxe. 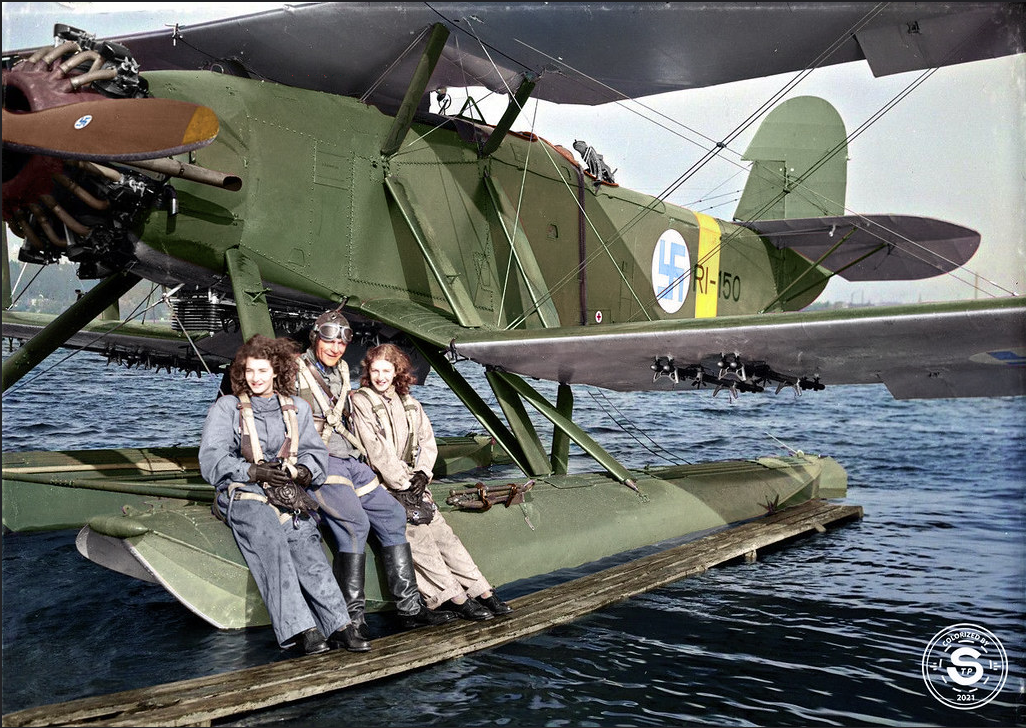 Break-action, shortened Karabiner 98k 26.5mm grenade launcher, first conceived in late-WW2 Nazi Germany, possibly 1943. Think of it as an upgrade to the flare gun based Sturmpistole, this smoothbore carbine was designed to fire the same Wurfkörper 326 LP and 326 LP n.A. grenades (LP stands for Leuchtpistole/flare gun) and thus fill a light anti-tank purpose in the urban warfare of 1944/45.

Some were manufactured during the Second World War, others after the war, notably in Norway from a .30-06 conversion Karabiner. 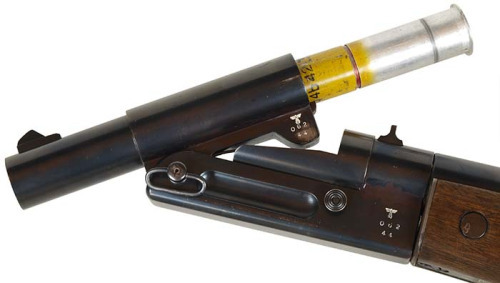 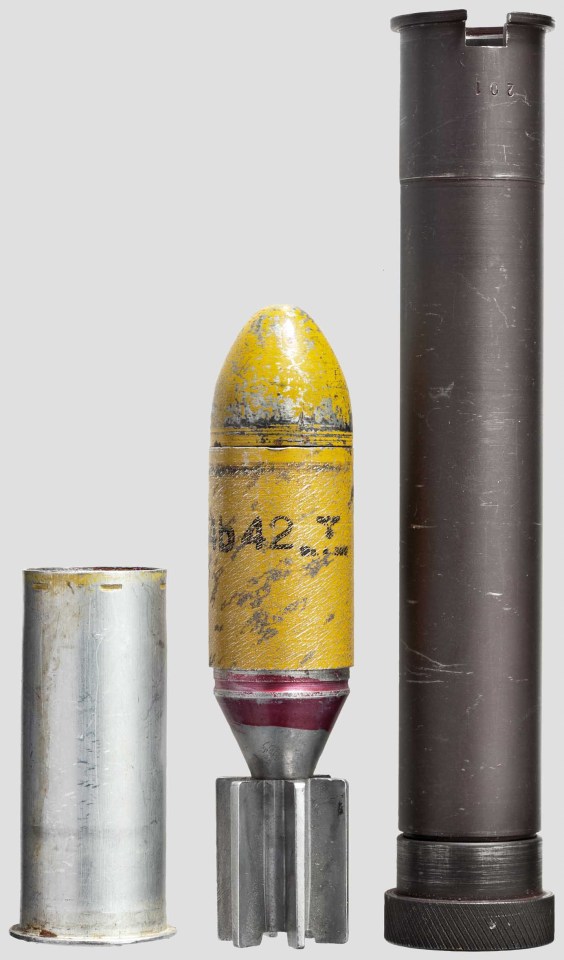 You see them around and the authenticity of many of these weapons is contestable. One thing that’s not contestable is how badass they look. 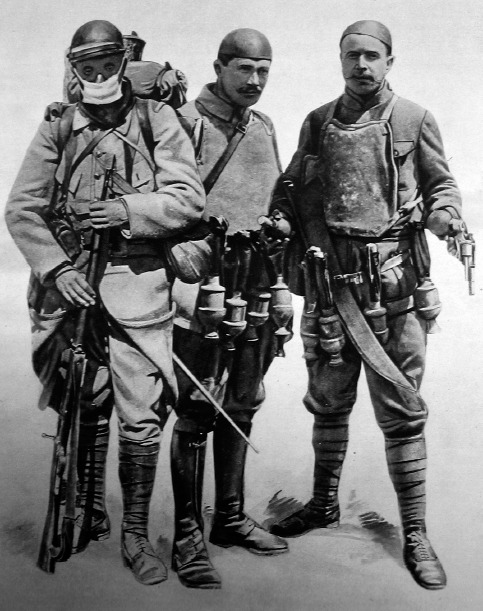 Pictured –  Three French soldiers equipped for trench warfare, using metal skullcaps, body armor, an 1886 Lebel rifle, a MAS 1873 revolver, and what appears to be a vast collection of captured German impact stick grenades. Notice the use of tactical mustaches, a staple of European powers. As popular as tattoos are today.

Starting in May 1915 however, France started issuing the F1 grenade – F standing for fusante, fused/as in fuse grenade – which is sometimes regarded as a father of modern fragmentation grenades. They all used 60g of cheddite. (Below) All the successive models of F1 Grenades, with the last being used up until 1940. 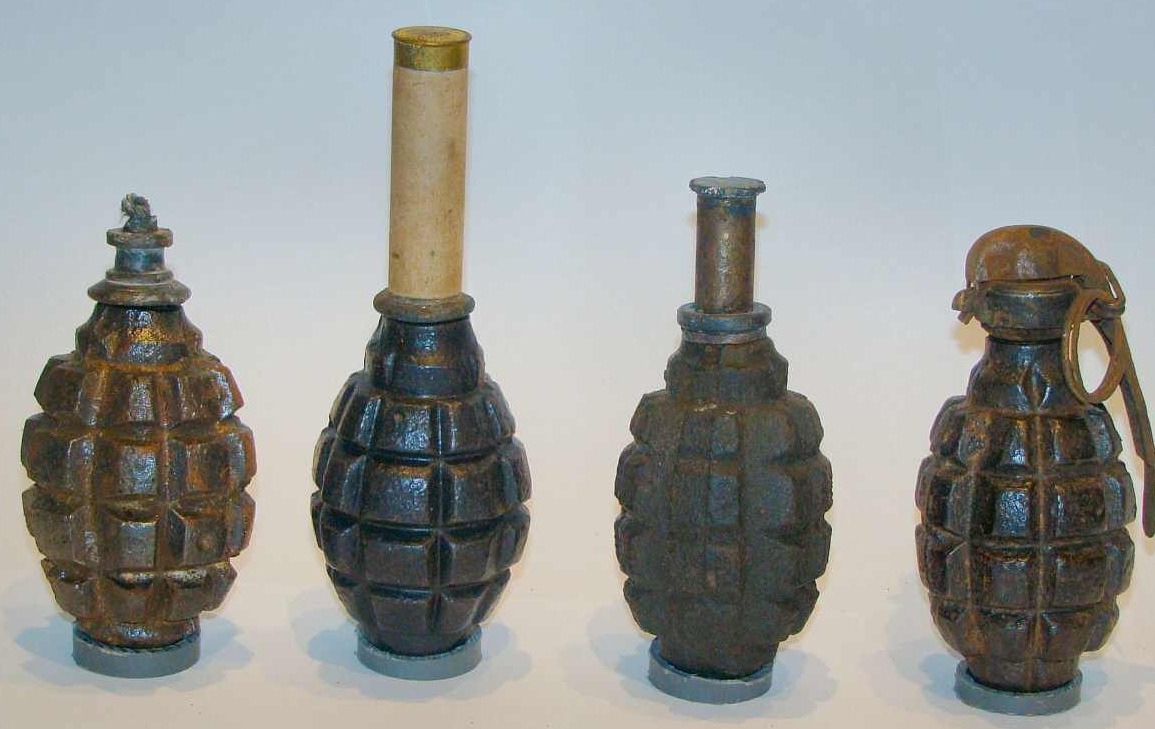 These may look familiar to you.

The furthest left is the F1 à mèche Mle 1915, issued in small numbers and immediately discontinued. You had to light the wick on the top of the grenade to start the fuse. Not optimal in combat, in the rain.

The first reliable fuse system was the F1 à percussion Mle 1915. It’s the second from the left and incorporates a cardboard sleeve that houses the fuse. 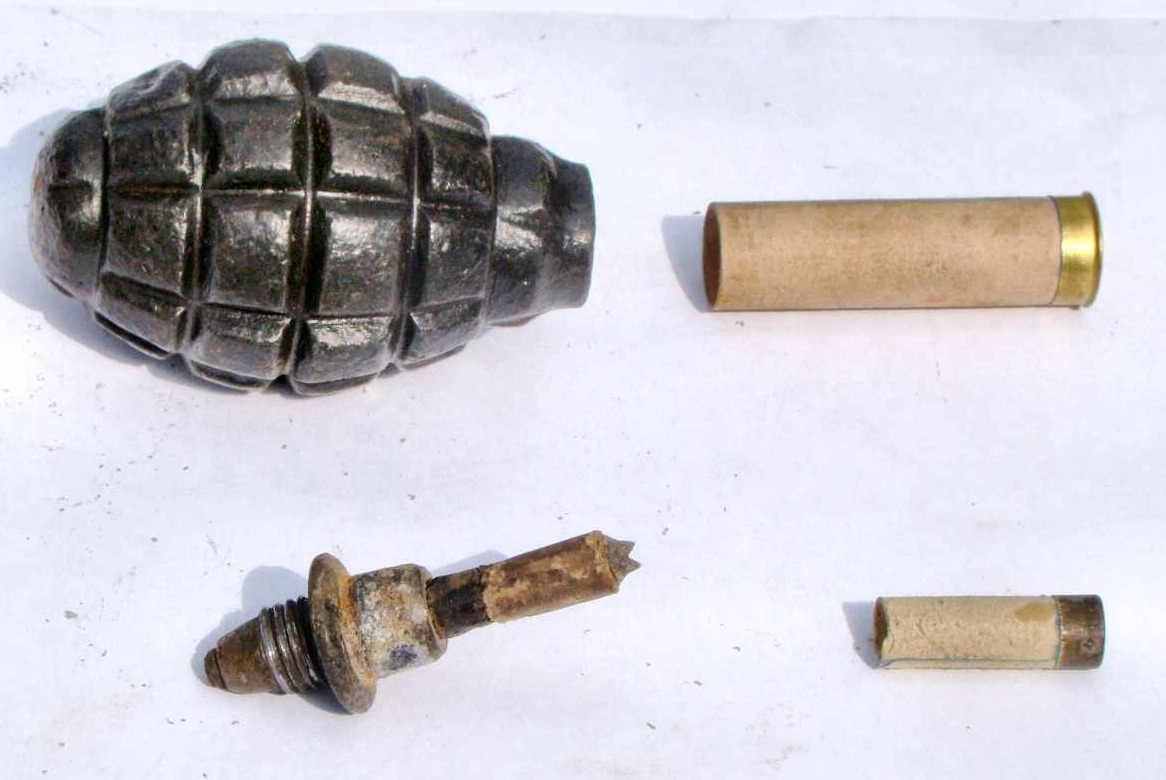 It was replaced in the Mle1916 because cardboard tends to lose a lot of its structural integrity when wet in trench warfare.

So we’re at the third from the left. They were operated by having a small fuse plug with an abrasive end fitted with a sleeve with a percussion cap at its bottom, the whole thing being fitted with an additional sleeve to protect it outside of combat. To ignite the fuse, the soldier had to remove the protective sleeve and strike the second one vertically as to slam the percussion cap on the fuse plug.

This led to Billant’s fuse, similar in concept to a Mills bomb and introduced in 1916 as the F1 automatique Billant Mle 1916B, the fourth from the left, and pictured below. 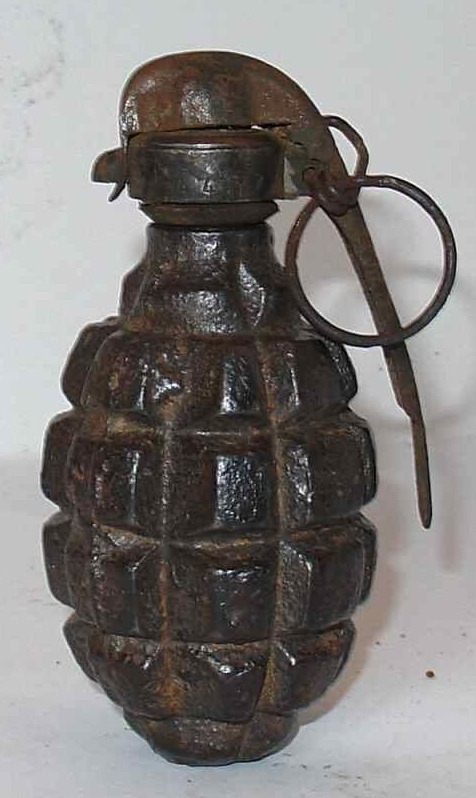 This model would see service for 24 more years and be adopted by the United States, Imperial Russia, Soviet Russia, Finland…Its successor included the Russian F1 and the American Mk2.

The lesser-known French grenade, the OF1 or Grenade Offensive N°1, is a concussion design used in trench warfare for offensive purposes. It loaded 250g of cheddite. Impact fused. 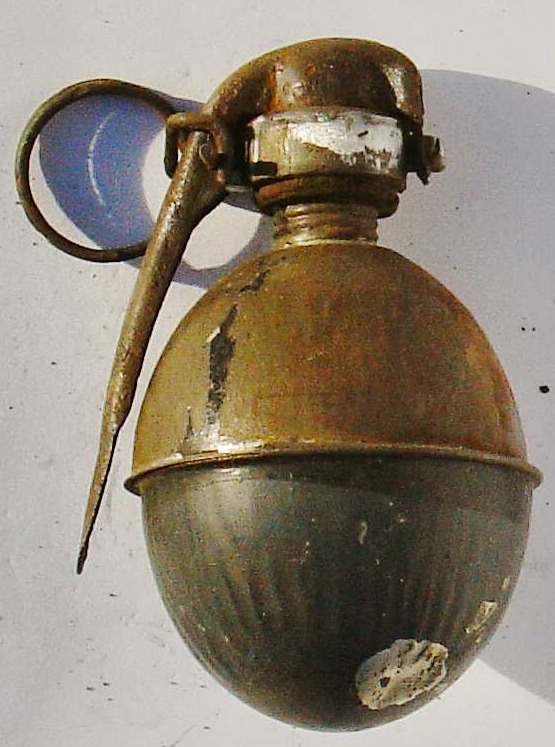 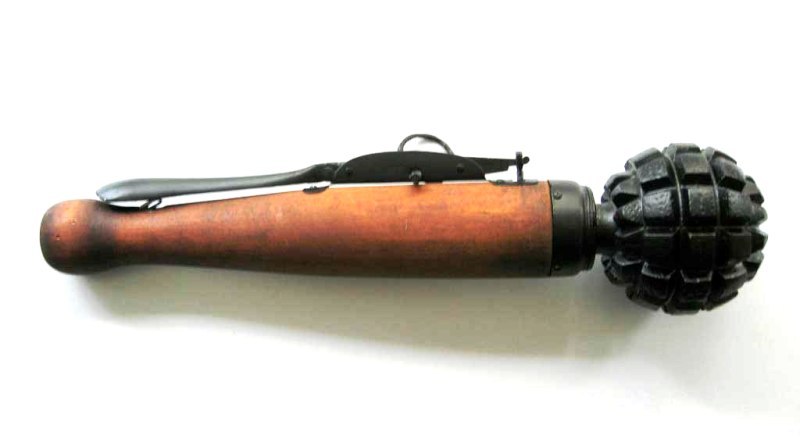 Manufactured by Germany c.1915-1918 using surplus Khg M1913 fragmentation grenades. 45g explosive charge, percussive system armed by removing the pin and lifting the spoon lever on the handle, after which a sharp shock and gravity would detonate the device. 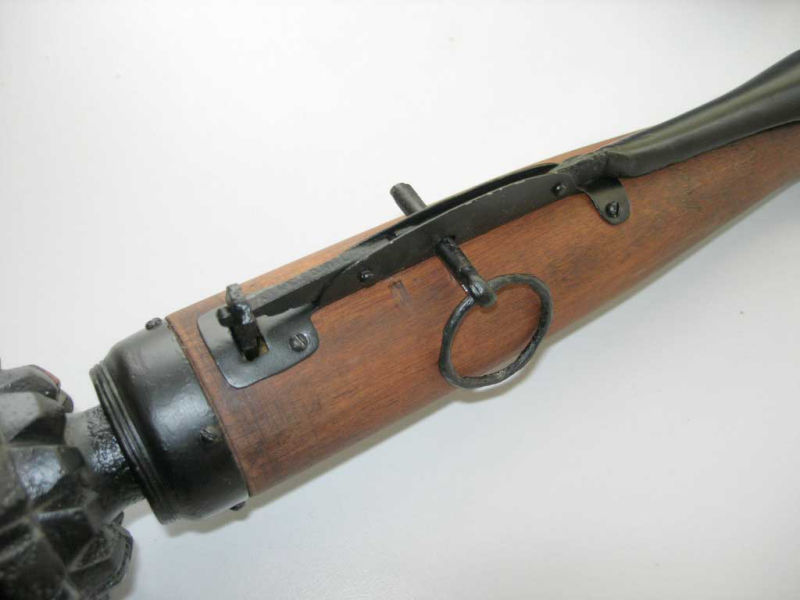 That’s what happens when you experiment with the early German ball grenade and meld it with their later 1915 stick technology. They had realized earlier with the regular M1915 percussive layout – one with a regular cylindrical head like other Stielhandgranate – you better had the heaviest head possible to make sure it landed right on its face. Impact grenades are tricky. If they landed in thick trench mud, they might not detonate no matter how hard you throw it.

A Visit to Can Tho