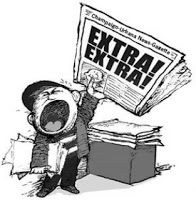 Facebook
Twitter
Pinterest
WhatsApp
The Dallas Daily chose to school President Trump on the role of the media. Frankly, who cares whether they hang out and watch he and his family eat at Twenty-One Club or not? Normally the mainstream news story would read “Evil, mysoganistic, racist, homophobe, President-Elect Trump had dinner at a restaurant that most American’s can’t afford to dine at (let along manage to reserve a table). The waiter, an African American underclass woman, served his family, harkening back to the days of the antebellum South.” Who needs that noise?

(Dallas News) Twice in a week, president-elect Donald Trump has ditched precedent and traveled without the press pool that normally moves with the president. The first was a trip from New York to Washington; the second for a dinner in a swanky New York restaurant after his press people told journalists that his day had ended.

Trump may see these reporters as an extension of the Paparazzi that hounded him when he was a reality television promoter and real estate mogul. They aren’t.

The press pool isn’t about staking out celebrities. The pool play an essential role in assuring government transparency and an informed American electorate.

President Trump and his family had expensive hamburgers across the street from Trump Tower. Maybe the media was excluded because the media is completely unfair. If the media doesn’t want to be treated like paparazzi, maybe they shouldn’t behave like them.

An American President is covered by the press. We all know that. Back when they wrote news instead of trying to make news, it was useful. It can be useful again but the media needs to change.

Their enthusiastic efforts (as disclosed by WikiLeaks) to get Hillary Clinton actually disqualifies them from any sort of journalistic respect from anyone. Dallas News, get over yourselves.