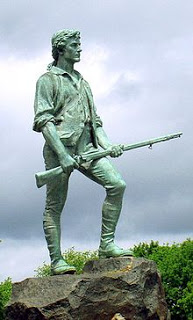 Facebook
Twitter
Pinterest
WhatsApp
Thoughts on Crime and Punishment
We can all agree on malum in se crimes: murder, arson, mayhem, robbery, burglary, theft, assault and battery, and so forth. They are crimes where the conduct, if proved, is wrong in and of itself. Malum prohibitum crimes (prohibited conduct) becomes far touchier, far more subjective: public intoxication, prostitution, failure to obtain the proper business license and exceeding the published speed.

The question of whether felons should vote becomes an interesting one should a future congress declare that mere membership in the National Rifle Association, for example, constitutes a felony. No, they may not wish to imprison all of us because it’s impractical, but felony status, can prohibit positions of honor, trust or profit in government, can prohibit the ownership of firearms or the right to vote. Does this situation change your opinion on who should have voting rights? Convicted by mere membership as a result of Congressional fiat, you have the equivalent of a yellow Star of David on your lapel (under Nazi Germany). Mere membership could lead to civil forfeiture of your property.
Am I being extreme? Maybe. Would that sort of law lead to revolution? Very likely. There aren’t enough inner city people in the US to collect firearms, but the progs could hire foreign mercenaries. Would any of you put it past them?
The Constitution hangs by a slender thread. Thank God for President Donald J. Trump because the prog agenda was forestalled by ‘deplorable voters in fly-over country’. Now the move is to eliminate the Electoral College so that California, New York and Illinois (for example) can set the national agenda all on their own, along with a few additional Quizlings.
I agree that the criminal justice system is flawed, crime and punishment can be debated endlessly. But where is this nation headed and do its citizens have the moral courage to stand for a Constitutional Republic? We shall see.
The China/Venezuela Nexus
China’s Permanent Representative to the UN defended Venezuela and promised continuing cooperation. “China will continue its cooperation with Venezuela based on the principles of mutual respect, equality and mutual benefit for the greater well-being of the two peoples,” Ambassador Ma Zhaoxu told a UN Security Council meeting.

“To help its people overcome temporary difficulties, China has decided to provide emergency supplies for livelihood to Venezuela,” said Ma.

“The relevant supplies are on their way to Venezuela in batches. On March 29, the first batch of medicines and medical supplies were delivered to the Venezuelan government.”

“China’s assistance to Venezuela is in keeping with its long-held principles for foreign aid. It is intended to help Venezuelan people overcome negative impacts caused by external interferences and sanctions with no political conditions attached,” said the Chinese ambassador.

China had no longstanding interest in Venezuela until the Chavez administration. Since 2009, China has become Venezuela’s second-largest trading partner and is an important investor.
China wants to protect its investment and trade but also is exploiting the instability to expand its footprint in the western hemisphere. Ambassador Ma’s statements reveal the Chinese government’s judgment that the Maduro political order will survive.
Venezuela’s closest allies have been Cuba and Russia. China has joined them in encouraging the Maduro administration to resist US and international pressure to step down.

From the Daily Caller:
The newest batch of John Podesta’s hacked emails released by Wikileaks shows Obama’s transition team kept lists of Muslim and Asian candidates for jobs in the administration. According to an email chain from 2008, John Podesta received lists of exclusively Muslims and Asians to be considered for jobs in the Obama administration.
The email chain revealed that in this process, Middle Eastern Christians were purposefully excluded, or set aside in a separate list, with an aide writing, “In the candidates for top jobs, I excluded those with some Arab American background but who are not Muslim (e.g., George Mitchell).
Many Lebanese Americans, for example, are Christian. In the last list (of outside boards/commissions), most who are listed appear to be Muslim American, except that a handful (where noted) may be Arab American but of uncertain religion (esp. Christian).
Also notable, there was concern that some of the Muslims suggested would not survive media scrutiny, with one aide writing, “High-profile Muslim Americans tend to be the subject of a fair amount of blogger criticism, and so the individuals on this list would need to be ESPECIALLY carefully vetted.”
She continues, “I suspect some of the people I list would not survive such a vet — but I do personally know, at least in part, virtually all of the candidates in the 1st two categories (but I know very few of those listed for outside boards/commissions).”
Within the lists themselves, candidates were further broken down, with every candidate labeled by their nationality and sometimes race. This follows a pattern of the Obama Administration using race and religion to determine hiring, with other leaked emails showing potential political appointees being labeled with an F for female, B for black, H for Hispanic, and M for Muslim.