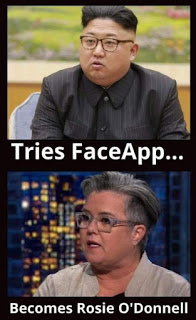 Disturbing revelations from FaceApp, the Russian designed software that is concerning some people, has taken an unpleasant twist. The disconcerting appearance of Dear Leader when the app is applied has the country in an uproar.
Is Dear Leader a white, (identifies as female) bull lesbian? Or  is Dear Leader a Korean (identifies as male) of unknown sexual preferences, and peccadillos?
Both suffer from gout, both can devour a bowl of kimchi in mere seconds.
Both are avowed communists.
Neither have ever been seen at the same party together, and that’s damning proof if it’s proof that you’re looking for.
Hong Kong
Yesterday, Sunday, 21 July, Hong Kong experienced another large street march, ending in clashes between marchers and riot police.
The demonstration began peacefully, staying within barriers erected by the police. By evening, hotheads decided to confront police and crash barriers.
Organizers said 400,000 people participated. The police said the number was 138,000. News services did not report arrests but did report the use of tear gas and other non-lethal riot control measures.
Commentators said most of the demonstrators were youths. By any standard, the number of participants was large. Their issues are unchanged, including withdrawal of the extradition law, dropping riot charges against detainees, universal suffrage and the resignation of Chief Executive Officer, Carrie Lam. 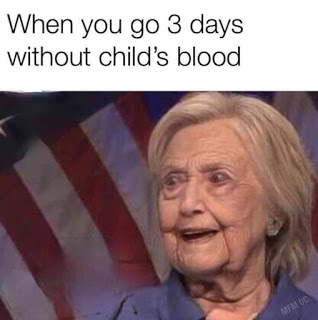 The government has made all the concessions it intends to make. It also is gradually tightening control of demonstrations. The People’s Republic of China (worker’s paradise) is no longer amused. I heard from friends in Hong Kong that the PRC is blaming the CIA for mass dissatisfaction on an unprecedented scale in Hong Kong. I’m sure that the CIA would love to claim that scalp, but it’s not that good. China brought all this on themselves. It’s sort of like the Democrats blaming Russia for Hillary’s loss.
And speaking of Hillary, the photograph (right) is a FaceAPP of what Hillary would look like if she didn’t drink the blood of living children for three days.
Pakistan
The Tehrik e-Taliban Pakistan– the Pakistani Taliban – attacked a police checkpoint and a hospital in Dera Ismail Khan in northwestern Pakistan.
A team of gunmen on dirt bikes opened the action by attacking a police station, where they killed two policemen. When the additional police reinforcements arrived at the local government hospital, a female suicide bomber attacked it, killing herself and six more people and injuring more than 30.

“When their bodies were taken to the main hospital, a suicide bomber, believed to be a female, wearing a burqa, triggered an explosive-laden jacket and caused huge losses,” said Waqar Ahmad, a local police officer.

In claiming responsibility for the attack, the Pakistani Taliban said it was to avenge the recent killing of one of their commanders. 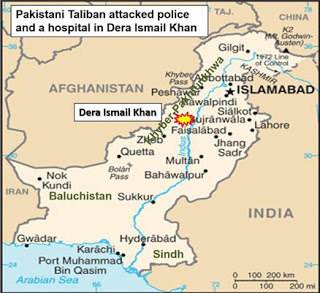 This is the first attack reported by this group in open sources since the Pakistani Taliban attack in Baluchistan in late June. That attack killed one policeman.
As reported, this attack is unusual in that the initial gunfight occurred outside the city, whereas the bombing occurred at some distance inside the city. The preparation and coordination were more complex than is characteristic of most Pakistani Taliban attacks.
Sustained counter-terror operations since 2009 have reduced the terror threat in the tribal agencies of northwestern Pakistan. This attack demonstrated the group retains some capability for lethal action.
Terrorists groups that operate from Pakistan against Afghanistan or India receive lip service from Pakistani authorities because Pakistan retains support for terrorism in neighboring countries as an element of its national security strategy.
Iran-UK
Iran retaliated against the UK for detaining an Iranian tanker MT Grace 1 at Gibraltar. The Iranian Islamic Revolution Guard Corps (IRGC) confirmed it seized the UK-flagged tanker Stena Impero on 19 July.
A leaked audio clip related the conversation between the “Iranian Navy”, the Stena Impero and the UK frigate, HMS Montrose (F326).
Iranian forces also briefly stopped a second tanker, the Liberian-flagged tanker Mesdar, but allowed it to proceed.
The leaked audio clip proved that the IRNA report that the British ship was seized because it collided with an Iranian fishing boat is a fabrication. Maritime ship tracking sites showed the ship clearly was in Omani waters when the IRGC boarded it and forced it to sail to Bandar Abbas. This was an act of national piracy.
The UK’s reaction. “These seizures are unacceptable,” British Foreign Secretary Jeremy Hunt said as he prepared to enter an emergency government meeting Friday night. “It is essential that freedom of navigation is maintained and that all ships can move safely and freely in the region.”
“We’re not looking at military options, we’re looking at a diplomatic way to resolve the situation, but we are very clear that it must be resolved,” Hunt later told Sky News, warning that if the situation is not resolved quickly “there will be serious consequences.”
Iran’s behavior guarantees that insurance rates will increase to make sanctions against Iran bite more deeply. Threats to international shipping risk inviting strong responses from maritime powers.

Iran’s actions are turning sympathetic countries against it. China and Russia have made sympathetic noises, but neither shows any disposition to become more deeply and directly involved in Iran’s problems. The problems are simply too large and complex.
In the past two years, Iran’s responses to US pressure, to sanctions and to Israeli attacks on Iranian targets in Syria have been surprisingly weak. Iran has not retaliated for Israeli attacks in Syria. Its attacks on shipping are provocative but have been limited, until now.
The British need to be able to convoy their own ships with their own military vessels as they transit the Straits of Hormuz…or buy oil somewhere else. The problem that the UK has comes with a navy that has been allowed to shrink to pathetic proportions. Putting British Troops armed with defensive weapons and man-portable air defense systems on merchant ships would also work, but the British haven’t shown that sort of resolve…to their detriment.