I have a difficult time getting my head around this announcement (more here)  but the US Navy wants to stop its string of ship building failures. Wow. There have been a lot of failures. So many that one would think they were deliberate. I guess nobody consulted a fifth grader before moving forward on them.

The Zumwalt Class DDG/Cruisers, which fired long range shore bombardment projectiles at $800K EACH, was something that wet dreams were made of in the DC Beltway. I wonder how many captains made admiral behind the Zoom? Before the program crashed…

Apparently there are some admirals who are tired of being the butt of jokes because everything that they are turning out doesn’t work as intended. Keep in mind that a trained chimp could have predicted the outcome of the recent boondoggles and accidents at sea that plagued them.

The FFG(X) program, wherein the US bought a proven Italian design, is moving forward and there are a lot of us who are hopeful that it will signal a change.

Thanks for pointing out this development, Claudio.

It’s not the least bit surprising that the Koreans (South Korea) are developing submarine launched ballistic missiles. No, they don’t have nuclear weapons now, but they REALLY, REALLY want them. I can recall being a serving US Naval officer in Korea, working with my counterparts and that’s all that they could talk about.

So now they are taking steps to manage their own (nuclear) deterrent for when they get the bomb. The US is not a reliable ally. Jo and Ho are emblematic of that problem and they need to look to their own defense. Who can blame them? The only question now is how long it will take them to deploy their own nuclear weapons.

January 13, 1848, the British and Sikhs fought to a bloody draw at the Battle of Chillianwala.

A modest force (13,000 men and 66 guns) of the British East India Company’s Bengal Army, commanded by Sir Hugh “Paddy” Gough, unexpectedly encountered a much larger Sikh army of 30-40,000 troops and an equal number of guns under Sirdar (General) Sher Singh, near the village of Chillianwalla in the Northwestern Indian province of the Punjab. The first major battle of the Second Anglo-Sikh War, Chillianwala was one of the bloodiest battles ever fought by British East India Company forces. 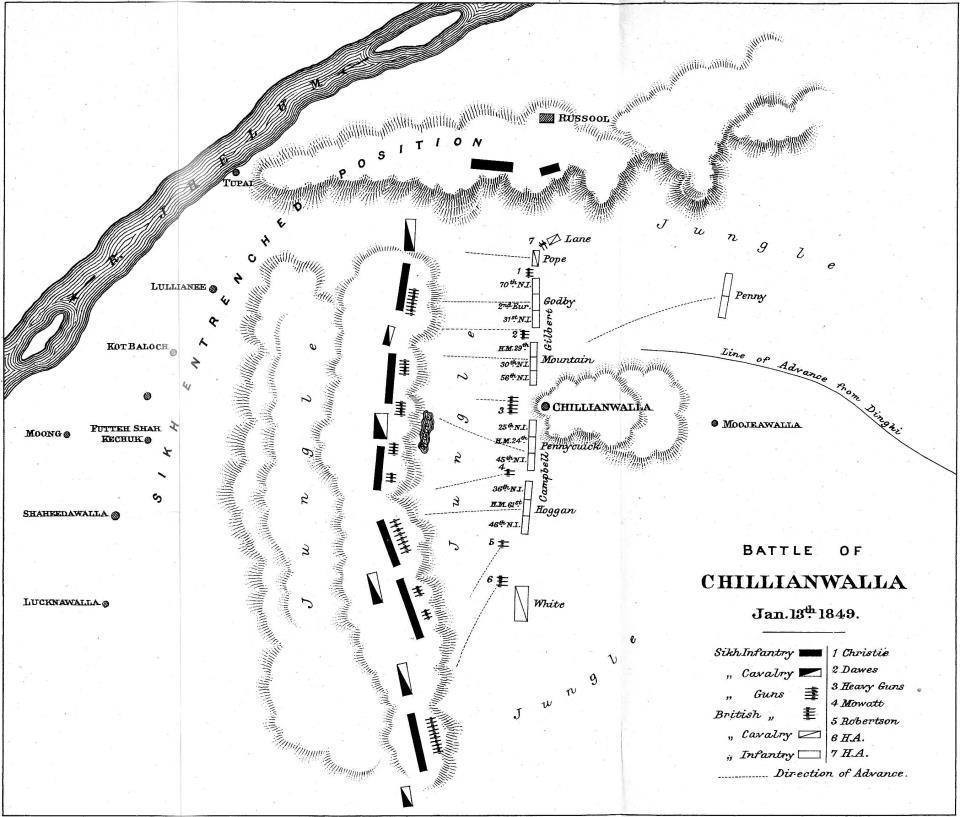 Advancing through terrain broken-up by jungle and scrub, against an enemy on higher ground and well supported by artillery, the British and Sepoy regiments took heavy casualties. The 24th Regiment of Foot (later made famous for its actions against Zulus at Isandlwana and Roark’s Drift) became disorganized and separated from the other attached units of its brigade and took particularly heavy casualties (approx 50%) trying to storm the Sikh guns. The regiment lost its colors, and the brigade’s commander was killed.

The battle ended in a draw, with the British driving the Sikhs back, but withdrawing the next day from the area. But British loss of prestige, particularly among their own Indian subjects, would have long-term consequences. Nine years later vassal Indian princes would feel emboldened enough to support the Mutiny that erupted within the Bengal Army, turning it into a national revolt against British rule.

Chillianwala became synonymous in British military parlance with a tactical battle turned into “bloody shambles”. After the disastrous charge of the Light Brigade, Lord Lucan remarked “This is a most serious matter”; to which General Airey replied, “These sort of things will happen in war. It is nothing to Chillianwala.”

CALLER: Is this Pizza Delight?

CALLER: I must have dialed a wrong number. Sorry.

CALLER: OK. I would like to order a pizza.

GOOGLE: Do you want your usual, sir?

CALLER: My usual? You know me?

GOOGLE: According to our caller ID data sheet, the last 12 times you called you ordered an extra-large pizza with three cheeses, sausage, pepperoni, mushrooms and meatballs on a thick crust.

GOOGLE: May I suggest that this time you order a pizza with ricotta, arugula, sun-dried tomatoes and olives on a whole wheat gluten-free thin crust?

CALLER: What? I detest vegetable!

GOOGLE: Your cholesterol is not good, sir.

CALLER: How the hell do you know!

GOOGLE: Well, we cross-referenced your home phone number with your medical records. We have the result of your blood tests for the last 7 years.

CALLER: Okay, but I do not want your rotten vegetable pizza! I already take medication for my cholesterol.

GOOGLE: Excuse me sir, but you have not taken your medication regularly. According to our database, you purchased only a box of 30 cholesterol tablets once, at Drug RX Network, 4 months ago.

CALLER: I bought more from another drugstore.

GOOGLE: That doesn’t show on your credit card statement.

CALLER: I paid in cash.

GOOGLE: But you did not withdraw enough cash according to your bank statement.

CALLER: I have other sources of cash.

GOOGLE: That doesn’t show on your last tax return unless you bought them using an undeclared income source, which is against the law.

CALLER: WHAT THE HELL!

GOOGLE: I’m sorry, sir, we use such information only with the sole intention of helping you.

CALLER: Enough already! I’m sick to death of Google, Facebook, Twitter, WhatsApp and all the others. I’m going to an island without internet, cable TV, where there is no cell phone service and no one to watch me or spy on me.

GOOGLE: I understand sir, but you need to renew your passport first. It expired 6 weeks ago…