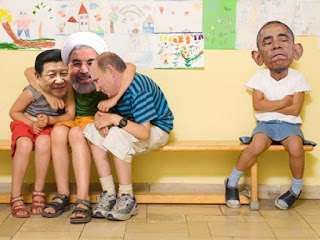 There is a lot of foreign analysis of what is physically wrong with Hillary Clinton. Intelligence services are looking at this hard.

North Korea launched three ballistic missiles from Hwangju on September 5, splashing down in the Sea of Japan west of Hokkaido, but in Japan’s exclusive economic zone, more than 600 miles from the launch site.

A statement published by the Korean Central News Agency (KCNA) reported that Kim Jong Un was present at the launch to provide “field guidance.” The article reported, “Hwasong artillery units of the Korean People’s Army (KPA) Strategic Force were involved in the drill.”
KCNA Reporting:
– “Those units are tasked to strike the bases of the US imperialist aggressor forces in the Pacific operational theatre in a contingency.”
– “The drill was conducted to reexamine the reliability such as the flight security and guided accuracy of the improved ballistic rockets deployed for action, and to assess and inspect the capabilities of the units for action.”
-“Upon arriving at the firing site, he (i.e., Kim) learned in detail about the plan for the drill and the tactical and technical specifications of the improved ballistic rockets.”
The Hwasong artillery units are equipped with extended range Scud and Musudan/BM-25 missiles. The article indicates that this was a combat exercise to practice attacking a single target with multiple missiles. South Korean media reported that the test occurred just hours after the issue of the potential threat from North Korea was discussed among regional powers at the G20 summit in China.
The Norks are nothing but non-stop entertainment.

Barack isn’t feeling much love, and the Daily Timewaster posted this picture (right) allegedly taken at the G-20 Summit that really says it all.

The Chinese didn’t wheel stairs to the door of Air Force One, forcing Barack to exit the rear of his aircraft, and there were incidents of bullying there in Beijing.

The Russians called Barack and John (Wooden Head) Kerry, liars, which they are. Then there was the issue with the Philippines president (below). All in all, Barack has had better summits.

Philippine President Duterte, who became famous this last week for pointing out that Obama’s mother was a whore, and members of his cabinet, complained about a growing Chinese ship presence near Scarborough Shoal. Duterte said on the 2d that the Philippine Coast Guard saw Chinese barges at the Shoal. “The coast guard made some little trips near them and there are a lot of barges. … What is the purpose of a barge?” Duterte said.

Duterte texted to reporters that there were four Chinese coast guard ships and six other ships including blue-colored barges near Scarborough Shoal. “The presence of many ships other than coast guard in the area is a cause of grave concern.”
Defense Secretary Delfin Lorenzana on the 4th expressed “grave concern” about the number and nature of the vessels, saying the presence of barge-like ships could signal Chinese plans to dredge — and potentially build — in the area.
China took possession of the Shoal from the Philippines in 2012. Since then Chinese ships have denied access to it by Philippine fishing boats, despite the award by the Permanent Court of Arbitration of access to the Shoal to the Philippines.
President Duterte has tried holding bilateral talks with Chinese emissaries to discuss ownership, which is China’s preferred diplomatic strategy. Duterte is learning the hard way that Chinese maritime, dredging and naval activities are not synchronized to the statements of Chinese diplomats.
When the Foreign Ministry’s spokesperson said the situation has not changed, she meant that China still possesses the Shoal, claims full sovereignty and the Philippines has no access.
The barges almost certainly have been positioned to support or prepare for dredging and island building. The Chinese coast guard always is present “ostensibly” to police Chinese fishing boat and other activity. That is the same tactic the Chinese are using against Japan in the Senkakus.
Syria

On Saturday, 3 September, the Turkish army made a second incursion into Syria. A rebel spokesman said that 30 tanks and 100 soldiers linked up with rebels at el Rai, just inside the Syrian border and 55 kilometers west of Jarablus.

The Syrian Observatory for Human Rights reported that Turkish forces and Syrian rebels expelled the Islamic State (ISIL) from the last areas of the Syrian-Turkish border under their control on the 4th. “The Islamic State has lost its contact with the outside world after losing the remaining border villages…. Rebels and Islamist factions backed by Turkish tanks and warplanes” took control of several villages on the border “after IS withdrew from them, ending IS’ presence on the border.”
An embedded journalist reported that 5,000 troops and rebel fighters are executing Operation Euphrates Shield.
President Erdogan told reporters, “We are there with Euphrates Shield; we are there to protect our border, to provide for our citizens’ safety of life and property, and to ensure Syria’s integrity…It is our wish that a terror corridor not be formed across our southern border.”
The Islamic State fighters abandoned el-Rai, as they abandoned Jarablus after the Turks began their operation on 24 August. The Turks are conducting a perception management operation against the Islamic State, as much as a combat operation. The Islamic State fighters always manage to escape Turks and had been receiving support and supplies from Turkey. Their position always depended on the support and supply infrastructure from Turkey.
The terror corridor is a reference to the Syrian Kurds, whose strategic objective was to link Syrian Kurds in Afrin with Syrian Kurds east of the Euphrates River. The latest Turkish incursion has blocked the Syrian Kurdish forces who began an offensive operation last week eastward from Afrin towards al Bab.
The Turkish incursion at Jarablus tied down the Syrian Kurds at Manbij. Instead of Islamic State forces holding a stretch of Syrian border, the Turkish army now holds it.

The Turkish operations in Syria and Northern Iraq is about destroying the Kurds, not about curbing the aspirations of ISIL.