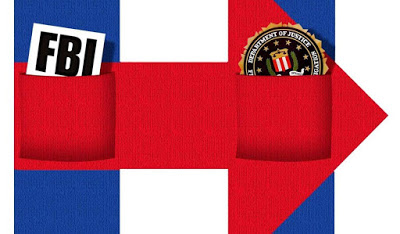 The FBI investigation of Hillary Clinton has not served the rule of law. The rule of law — a pillar of American constitutional freedom since the end of the Civil War — mandates that the laws are to be enforced equally. No one is beneath their protection, and no one is above their requirements. To enforce the rule of law, we have hired the FBI. What do we do when the FBI rejects its basic responsibilities?
Under the present administration and certainly under a Clinton Administration, we just suck up the fact that the FBI is corrupt and move on. The Administrative Elite who run the country are comfortable with a blatantly corrupt FBI because it gives them a warm feeling. If Hillary is shielded from the law, then so may they be. Look no farther than the Internal Revenue Service. The IRS rot and corruption has been made bare in Congressional hearings during the Obama Administration. How many of them have gone to prison? 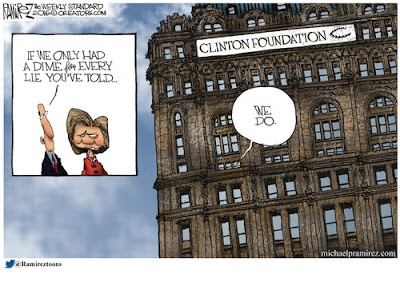 Roughly half of Americans think this is all wonderful and worthy of embracing. That is the measure of how far we have fallen as a nation as as a people. Hillary Clinton is arguably the most blatantly corrupt politician in American history. Sure, there have been hosts of others, but with Clinton, it’s right out there for all to see. There is no pretense of respectability.

When I expect to see people rise up against not only Clinton but the Washington Machine (including the never Trump people) who support her, I hear crickets – for the most part.

Hillary Clinton represents the establishment that has built a very comfortable nest for itself that feeds like a lamprey on the nation. $20,000,000,000,000 in debt and rising, with no end in sight.
This morning, Linda G asked, “Do you think enough states will ever get together to make the Convention of States a reality? And do you think it will actually pull us back from Socialism?” This is my answer:

How many Americans (by percentage) who are eligible to receive Social Security and Medicare are willing to tell the government to shove off and reject receiving payments from a ponzie scheme. Social Security is “free cheese” and “Obamaphones” for older Americans. Sure, you pay into it, but it’s not invested. Congress spends it. And they they pay you back out of the general fund (tax money), pouring far more out to the aged public than was ever paid in.

My sense is that almost ALL Americans who receive Social Security payments would not refuse them. The same is true for Medicare. Socialism is like a drug. And people all have their favorite drug. Addiction is like that, isn’t it? If you’re an alcoholic, you feel comfortable taking a swipe at a pothead or a tweeker.  America tried ‘prohibition’ and it failed miserably. The 18th Amendment was ultimately repealed. This was true because people liked to have a drink. Socialism is the same thing. Free cheese somehow tastes sweeter than cheese that you have to buy.