The United States Navy has established a ‘Sea Base’ off the coast of the Miyagi Prefecture to assist Japanese authorities with providing at-sea search and rescue and recovery operations in support of the Japanese Self Defense Forces. Japan is leading their own recovery effort, but the US is providing support in this time of crisis following the 8.9 earthquake and subsequent tsunami that inundated the Japanese coast. Roughly 90,000 people are missing, many feared dead. Over 200,000 Japanese civilians have been relocated to disaster recovery sites where they will have food, water and shelter. Many of these people have lost everything they owned.
The initial US contribution to this sea base will be centered around the USS Ronald Reagan (CVN 76). The USS Ronald Reagan will serve as a helicopter support base offshore for both US Navy and Japanese SDF helicopters. As is usually the case, the nuclear powered aircraft carrier is poised to be the most versatile and flexible capability in responding to the needs following an international catastrophe. The Ronald Reagan will be supported by the USS Chancellorsville (CG 62), USS Preble (DDG 88), USS McCampbell (DDG 85), USS Curtis Wilbur (DDG 54), USS Mustin (DDG 89), USS Tortuga (LSD 46), and USNS Bridge (T-AOE 10). 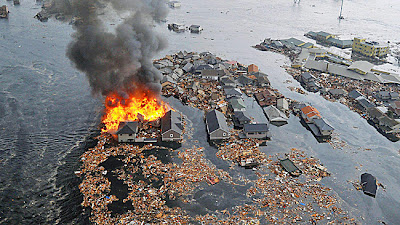 A number of US Navy ships will be following this initial force including the Essex Amphibious Ready Group and the USS Blue Ridge (LCC 19).
Japan has dispatched 50,000 troops to the region including over 190 aircraft so far. Japan has asked for the US military to transport 900 troops and 250 vehicles as part of the relocation of thousands of Japanese SDF troops from various regions of the country. News reports also indicate a large (but unknown number) of Marine Corps helicopters are being shifted from Okinawa to bases north in Japan to support operations. The anticipated role of the US Marine Corps helicopters will be to ferry supplies and logistics to the stricken area.