How it’s Supposed to Happen 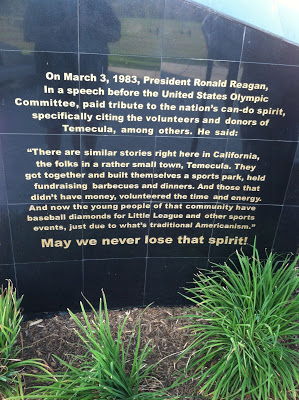 They play at the Ronald Reagan Sports Park. It wasn’t so named because Reagan bogarted the money out of the taxpayer’s pocket to build it.

“There are similar stories right here in California, the folks in a rather small town, Temecula. They got together and built themselves a sports park, held fundraising barbecues and dinners. And those that didn’t have money, volunteered the time and energy. And now the young people of that community have baseball diamonds for Little League and other sports events, just due to what’s traditional Americanism.” – Ronald Reagan, at a Luncheon Meeting of the United States Olympic Committee in Los Angeles, California March 3, 1983

It’s not government’s role to do it all for us. It’s up to us to do for ourselves. Coincidently,  the sport’s park isn’t full of trash and graffiti either. I wonder why? Maybe it’s because people have a stake in the outcome of what they build. After the baseball game, I saw people picking up trash that they may have or may not have been responsible for in an effort to keep the facility clean.
It’s the opposite from the Obama “You didn’t build that” doctrine. One of the reasons that the inner city is always such an open sewer is because people don’t have a stake in anything. The government “free” money is treated as an entitlement and not as something that people sweated and sacrificed for.
Temecula is a multi-cultural town and in that it’s typical of most of Southern California. It’s a melting pot of races, religions and national origins. Where it differs, particularly in this case, from many cities is that people decided to BUILD IT.