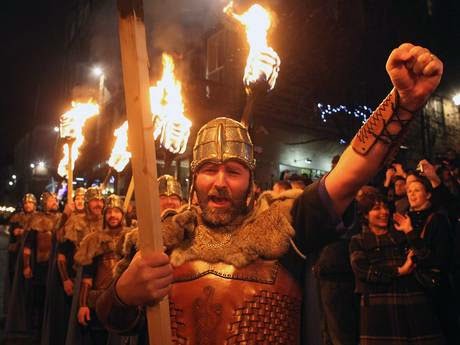 For those of us who have lived in Scotland, there is a deep and abiding understanding that nobody is capable of celebrating in the new year as completely as the Scots.
The observation of Hogmanay is not like a Robert Burns birthday celebration where they pipe in the haggis and everyone wears the kilt.

Living in California as I do (land of fruits and nuts), and as eccentric as people tend to be here, I am prohibited from wearing armor, and marching down the street carrying a torch in celebration of the new year. No, it has nothing to do with the berserker orgy, it has everything to do with the prohibition against open fires, which apparently harm the environment. Thus I must content myself with something short of what’s going on in the ‘old country’.
Hogmanay Do’s and Don’ts (as observed in Scotland)
(1) When in Scotland on Hogmanay you may wear a toga, when partying but it may not be white – only tartan is allowed. Any clan’s tartan is ok except for the treacherous Campbell tartan, which should not be worn in the Highlands unless you are ready for a good arse (their word) kicking at the behest of Clan McDonald – who still smarts at their defeat at the hands of the bloody Sasonacks* at the pass of Glencoe. (Clan Campbell fought with the English as their hirelings in this engagement to their everlasting shame)

*A Sasonack= Anyone who lives in England. It does not apply to Americans. Highland Scots are none too fond of the English – thus the Scottish national song, “Oh Flour of Scotland”, which I memorized out of necessity.

(2) Hogmanay begins on New Years Day and runs for a solid week. Even though January 2 is an observed bank holiday in Scotland, the country (sort of part of the UK) is closed for the entire week. When walking on the sidewalk in any city, you must take care to avoid the barf (slimy and slippery). If you slip on the wet sidewalks (wet from both inevitable rain and barf) and slide into the gutter, you are likely not to be hurt because you’ll be falling onto somebody who is already there.
(3) Vodka is not consumed on Hogmanay. If it’s your beverage of choice, you need to set that preference aside for a week. Yes, there is an exception. After the first night of Hogmanay, nobody really knows what you’re drinking and you can slip from bitters and whiskey into anything you like, so long as it has been distilled and is not served mixed with anything.
(4) Hangovers are not allowed during the week of Hogmanay. There is plenty of time for that once the week is done. The cure for the morning after the day after the night before is Iron Brew. One of the sad ironies of living in the vast American economy is that they don’t sell Iron Brew over here. A Scottish conspiracy? Maybe.
(5) You can fall in love on Hogmanay. However the Scots lassies are just as likely to be eating pickled eggs (horrible belches and farts) as the laddies and you should proceed prudently. Farting is encouraged on this holiday of holidays as explained by Billy Connolly (from Glasgow) below. You are also allowed to light your farts on Hogmanay with no loss of decorum.
(6) Can you observe Hogmanay for a fortnight (two weeks)? Yes. Many do. May you bathe during that time? It’s optional. Most who are celebrating have killed off the brain cells that know what a bath is, one week into the party.
(7) May you get in a fight (legally) on Hogmanay? I guarantee you that you will whether or not you want to. The one thing that most Scots do when they’re deeply into their cups is fight. However at a 4.0 blood alcohol most of them think that they are fighting more adeptly than they really are.
(8) Will you learn to “speak Scottish” on Hogmanay? Difficult to predict, however I have heard drunken Chinese trying to speak with a Scottish accent on Hogmanay and there are few things funnier.
(9) Is sheep shagging allowed on Hogmanay? Apparently not only on Hogmanay…but it’s illegal in the USA unless you are celebrating the Scottish national holiday of Hogmanay.
Wishing you a very happy Hogmanay.