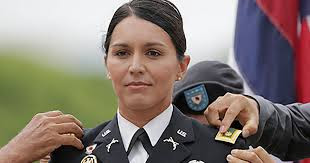 Facebook
Twitter
Pinterest
WhatsApp
Russia – Russia – Russia
I know that you’re all following the news and the accusations being slung about by Hillary – she who purchased a Russian generated fake dossier on President Trump.
According to Hillary, Rep. Tulsi Gabbard (D-HI) is a Russian agent, a Manchurian candidate who wants to steal the election, and Jill Stein, who in her role as a Russian agent, stole the election from Hillary. Hillary has engaged in a form of stand-up comedy and her talking points are being distributed on a daily basis to the democrat propaganda outlets that spew them. It’s given a real shot in the arm to Tulsi’s campaign and fund raising efforts.
The biggest complaint that the left has of Tulsi is that she doesn’t read from their talking points. A mind of your own can be a dangerous thing in politics these days. She hasn’t accepted ‘handlers’ from the progressive wing of the party and has scorned The Squad. Based on that alone, who wouldn’t conclude that she is indeed a cat’s paw of Vladimir Putin. George Soros (who is a white cat and a monocle away from being a classic Bond villain) has not contributed to Gabbard’s campaign.
So now, Tulsi has a small inkling about what President Trump goes through every day. It’s also interesting that Fox is the only news outlet that has been giving Gabbard a fair hearing.

Gabbard, who endorsed Sanders over Clinton during the 2016 presidential election, responded to her on Friday, calling her “queen of warmongers, embodiment of corruption, and personification of the rot that has sickened the Democratic Party.” Gabbard also said in a tweeted video message on Sunday, “If they can falsely portray me as a traitor, then they can do it to anyone.”

“That’s exactly the message that they want to get across to you: that if you stand up against Hillary and the party power brokers, if you stand up to the rich and powerful elite and the war machine, they will destroy you and discredit your message,” Gabbard said.

While I do not share most of Gabbard’s politics, she opposes war in the Middle East in the current framework of Syria and so forth. It’s not just Clinton who feels that Gabbard is a traitor to the Deep State’s love of endless war and war profits, the Military industrial complex feels that way too.
I’m not saying that Gabbard doesn’t like Hillary these days (it’s dangerous to write that), but Tulsi would unplug Hillary’s support to brew a pot of coffee.
Mail
Jim – Luckily for me the school district my daughter went to had rational people in charge, otherwise I may have done something that would have gotten me incarcerated. Of course it’s a rural district and the folks around here aren’t as likely to put up with that crap.

In California, where my grandchildren live, the liberal BS has sent families into charter schools or a combination of homeschooling/charter schools. California mandates tranny education for all children. They glorify sodomy and it’s wrong at every level. One of my daughters, a teacher, commented that they want to teach children about transexual options when they’re young enough to not know where babies come from.

Fredd said – Let’s give Bernie or Pochahontas a chance at implementing measures that will eliminate class disparities. How bad could it get? Once the proletariat’s are cut in on a piece of the pie, you, LL, have to open your White Wolf Mine gates to your brother and sister proletariates, there’s plenty of room; I’ve seen the photos.
You all (what, figure you and yours and maybe 2,000 like-minded proletariates) will be singing Pochahontas/Bernie’s praises, arm in arm, swaying to Kumbaya around the campfire.
What could be more idylic? C’mon, let’s give them a chance at spreading love, whaddya say?

I suspect that given where it is I live, we will be among the last to be assigned a commissar. And likely they’ll need a lot of them because of natural attrition.

WSF – The unruly masses must be disciplined by their betters for their own good, much like children by their parents (we are talking a perfect world here). Can’t you feel the love?

I feel a lot of love from Elizabeth Warren, who dances around on stage like an orangutan. Bernie is like a nasty old drunk uncle, who shows up at family gatherings, scolds and shouts. Not so much love for Comrade Bernie. I’m too old for Biden to grope, but I have daughters and grandchildren and while Slow Joe is feeling love, I’m afraid that he’d meet his maker in the process. God can deal with him however he chooses. We have cliffs around here. Beto would likely fall off one while sleepwalking. Kamala, a woman who staked her political career on giving love to men with the power to advance her career is dripping with love – for the right guy. Unfortunately I’d take a hard pass on that. The Butt Guy has love for dudes but I’d take a hard pass on that one too, and associated STD’s.

Camperfixer – “Woe to those who call evil good and good evil…”
Who comes up with this crap?

They are your betters, Camperfixer. They’re enlightened, and unfortunately for you, you’re not. Therefore they have a mission to bring you into the fold – into the big tent…by hook or by crook.

Do these psychotics sit around the [legal recreational] bong and create this garbage from thin air to see how outrageous they can be? Seems so.

They hope that one day, you too will love Big Brother.

This clown [judge] is using the same tactic being employed by the subversive lunatics with their incessant “IMPEACH” cry. Over, what? Nada. But creating something immoral out of nothing is what these whack-jobs do. It’s their [stinking] gift.
ALL weekend, every news outlet (Fox included) endlessly and seriously (huh?) discussed the impending impeachment of our President, never once dismissing it as frivolous and totally asinine. Not once (except of course Levin) did anyone showcase how the House Dem’s twisted and ignored the rules and decent decorum to meet their fabricated desired outcome. It’s almost like The Chatterers HAD to talk about it solely because a bunch of Democrat losers keep pushing it – dragging folks into their nasty pigsty…therefore it somehow had merit. It’s enough to drive a sane person further into the bunker. (But then again, who would fight back the locust swarm?)
The emperor has no clothes, and these twisted morons have managed to convince themselves that the sexes (it’s NOT gender! Geez!…learn English!) showering together in locker rooms is now “the new normal” therefore fully acceptable…and moral! BUT these same “judges” – talking out of both sides of their dung-filled mouths – can also say a regular male doing something normal, like holding the door open for a gal, is considered offensive and criminal. (see Isaiah 5:20 above)
Time to bring back tar & feathering, and clean house. Let’s start with this mentally ill judge, who needs to be run out of town on a rail as an example that societal foundation destruction by the likes of him will no longer be tolerated.
The rational among us clearly see these [now rampant] examples as the debasement of society by a bunch of weak-minded Lefty low-life’s as doing the devil’s work. There will be a reckoning…I suspect soon.

It would have been so much worse if Hillary had been elected.

Old NFO – Thanks for the link. And yes, Merkel really has NO choice, considering the condition of Germany right now.

Germany is circling the drain due to their Muslim ‘guest workers’. I swear, if you wanted a guest worker, why wouldn’t you look elsewhere? Just about anywhere is preferable to the Middle Eastern populations when you’re looking at the ignorant, impoverished masses with their savage belief systems.

Valueism – I received an interesting reflection from one person living and travelling for years in the east working with computer security. She stated it all in just one sentence that comprised the problem. Muslims have the Inshallah approach and until they start being responsible themselves nothing will happen. 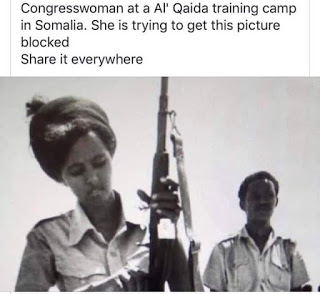 In America, we have Rep. Omar (D-MN), the poster child for Islam, beloved of the left. Everything that comes out of the filthy sewer that she calls a mouth is full of hate, full of class envy and full of hypocrisy. Mohammedans have a toxic culture and as the Germans are learning and as you point out, they are endemically lazy as a class. The millions of shiftless military age Muslim males that Germany took in are ruining Germany to the point where they now have to start shipping them back to their points of origin.

Jules – I tell you what, if the boys had been made to shower with the gals at my school then that’d be the boys all unnecessary for the rest of the day!

If I’d been in Junior High and the administration had been looking for a boy to shower with the girls, I would have volunteered. But I was like that. A giver, a volunteer, no job was too tough for me. And frankly if I’d been in high school, I would have said, “Send me in, coach!”

LSP – One of the best things about modern American socialism is that it’s ruled over and directed by multi-millionaires. And the same with China, who knows, perhaps the toiling masses with grow weary of their Mandarin Overlords?

All indications are that Hillary will enter the race. Hillary 3.0. And this time, she assures us all that she will combat Russian meddling.

Ed – “Judge Rules High School Girls MUST Shower with Boys, “
When someone starts shooting people over this, the wrong person will be decried as crazy.