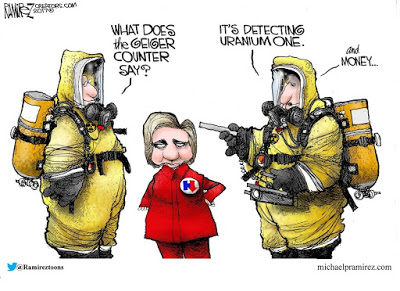 Facebook
Twitter
Pinterest
WhatsApp
She’s not a felon because nobody has the guts to take on the Clintons, who are reputed to have a very deep book on political foes. And if you’re in their way and gentle coercion and blackmail won’t work, they have you killed. It’s a long list.

Disgraced former Attorney General, Loretta Lynch and disgraced former FBI Director, James Comey, are but two of her former co-workers in the Obama Administration who have covered her back. And they are unlikely to do otherwise because the Clintons have a reputation to uphold. Deviate from that practice at your peril.
So…maybe it’s time to revisit the sale of Uranium One to the Rosatom State Nuclear Energy Corporation? At any other moment in my life the sale of uranium to Russia would have been headlines and people would have been incarcerated—forever (lock Her up). Not so in this situation where Russia colluded with the Clinton Foundation. It was not Donald Trump who colluded with the Russians, but Hillary Clinton, and friends.

Hillary Clinton ran the Obama Administration’s State Department like her personal ATM, raking in hundreds of millions of dollars in (bribes) contributions to the Clinton Foundation – in conflict of interest. Nobody has been prosecuted, nothing happened to any of the Clinton cronies or to the grand dam, herself.

The former head of Rosatom made four hidden donations to the Clinton Foundation totaling $2.35 million. They needed Hillary’s approval in order to acquire Uranium One and pay-to-play is the name of the game.
Bill Clinton received $500K for a speech in Moscow, paid for by a Kremlin-backed bank. (they’re all Kremlin-backed, but you take the point) He wanted his cut. Who can blame him? The Clintons were and remain above the law. 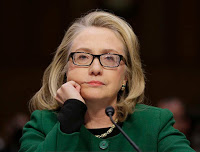 A lot of people made a lot of money selling Uranium One to the Russians. But Donald Trump wasn’t one of them.

And yet the Congress and the press is silent on this. The FBI claims to be running an investigation, but I suggest to you that they’re simply waiting for the statute of limitations to expire. The FBI is clearly NOT the agency that should be investigating this. Their reputation for fair, honest investigation is in the tank – clearly on matters involving the Clintons. Can the US Department of Justice be trusted? Can they?