Have you Heard About the Bird? 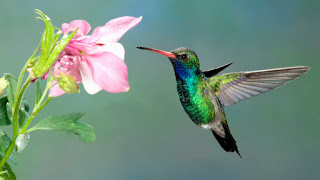 This is how a bird might see magnetic fields. (Theoretical and Computational Biophysics/UofI)
Mood Link (bird is the word)
Birds Can See Earth’s Magnetic Fields

A newly discovered protein in bird’s eyes allows them to them “see” Earth’s magnetic fields. These findings come courtesy of two new papers – one studying robins, the other zebra finches.
The eye protein is called Cry4, and it’s part of a class of proteins called cryptochromes – photoreceptors sensitive to blue light, found in both plants and animals. These proteins play a role in regulating circadian rhythms.

There’s also been evidence in recent years that, in birds, the cryptochromes in their eyes are responsible for their ability to orient themselves by detecting magnetic fields, a sense called magnetoreception.
We know that birds can only sense magnetic fields if certain wavelengths of light are available – specifically, studies have shown that avian magnetoreception seems dependent on blue light.
This seems to confirm that the mechanism is a visual one, based in the cryptochromes, which may be able to detect the fields because of quantum coherence.
Studies were launched to confirm this information and the study results were very encouraging. What does a bird actually see? Well, we can’t ever know what the world looks like through another species’ eyes, but we can take a very strong guess.