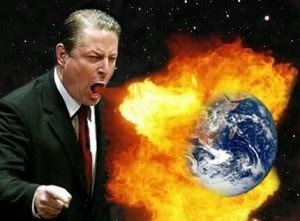 Facebook
Twitter
Pinterest
WhatsApp
This is bouncing around the blogs and I had to take my own shot at it. Al Gore begins quoting Jesus Christ in Luke 12:54 during his speech on climate change–

‘And he said also to the people, When ye see a cloud rise out of the west, straightway ye say, There cometh a shower; and so it is. And when ye see the south wind blow, ye say, There will be heat; and it cometh to pass.

Gore keeps on speaking. He finally looks down at the podium to see what’s wrong.
I’m surprised that he’s still crowing about climate change since he sold out to a Middle Eastern oil cartel and furloughed all of the climate hippies in his conservation company – and he bought the big mansion in Montecito. And paid off the maid in the hotel in Seattle who he tried to pay to have sexual intercourse with him – but she didn’t want to and he tried to force the matter (She characterized his amorous advances as those of a ‘crazed poodle’ — you can’t make this stuff up).