During open warfare, one expects to suffer submarine losses. These things happen when submarines shoot at things and things shoot at submarines.

1968 was a legendary bad year for submarines. The US lost the USS Scorpion. The Israelis lost the INS Dakar, the French lost the Minerve and the Soviet Union lost the K-129.

On January 27, 1968, at 07:55 hrs, Minerve was traveling just beneath the surface of the Gulf of Lion using her snorkel, roughly 25 nautical miles (46 km) from her base in Toulon, when she advised an accompanying Breguet Atlantic aircraft that she would be at her berth in about an hour.

This was the last time the boat and her crew of six officers and 46 sailors were seen. She disappeared in waters between 1,000 metres (3,300 ft) and 2,000 metres (6,600 ft) deep. Commander Philipe Bouillot later said that Minerve’s new captain Lieutenant André Fauve had spent 7,000 hours submerged over four years on submarines of the same class and never had a problem.

The only factor known that could have caused her to sink was the weather, which was extremely bad at the time of her loss.The French Navy promptly launched a search for the missing submarine mobilizing numerous ships, including the aircraft carrier Clemenceau and the submersible SP-350 Denise under the supervision of Jacques Cousteau, but found nothing and the operation was called off on 2 February. However, the search for Minerve, under the name Operation Reminer continued into 1969 and utilized the submersible Archimède with the U.S. survey ship USNS Mizar.

There is a conspiracy theory afoot that Minerve was sunk by a Soviet submarine. There is no known, credible, basis for the theory, but a faulty snorkel or operator error was extremely unlikely. She went down in deep water and parts of her were located fifty-one years later.

Minerve was located in July 2019 by a survey vessel belonging to private US company, Ocean Infinity.

USS Scorpion was referred to by members of her crew as USS Scrap-iron.

There were several theories that attempted to explain the loss of USS Scorpion. It was most likely lost due to a torpedo explosion in the tube. The explosion led to an uncontrollable fire in the torpedo room.

The book Blind Man’s Bluff documents findings and investigation by Dr. John Craven, who surmised that a likely cause could have been the overheating of a faulty battery.The Mark 46 silver–zinc battery used in the Mark 37 torpedo had a tendency to overheat, and in extreme cases could cause a fire that was strong enough to cause a low-order detonation of the warhead. If such a detonation had occurred, it might have opened the boat’s large torpedo-loading hatch and caused Scorpion to flood and sink.

While Mark 46 batteries have been known to generate so much heat that the torpedo casings blistered, none is known to have damaged a boat or caused an explosion. Dr. John Craven mentions that he did not work on the Mark 37 torpedo’s propulsion system and only became aware of the possibility of a battery explosion twenty years after the loss of Scorpion.

In his book The Silent War, he recounts running a simulation with former Scorpion executive officer Lieutenant Commander Robert Fountain, Jr. commanding the simulator. Fountain was told he was headed home at 18 knots (33 km/h) at a depth of his choice, then there was an alarm of “hot running torpedo”. Fountain responded with “right full rudder”, a quick turn that would activate a safety device and keep the torpedo from arming. Then an explosion in the torpedo room was introduced into the simulation. Fountain ordered emergency procedures to surface the boat, stated Dr. Craven, “but instead she continued to plummet, reaching collapse depth and imploding in ninety seconds – one second shy of the acoustic record of the actual event.”

Craven, who was the Chief Scientist of the Navy’s Special Projects Office, which had management responsibility for the design, development, construction, operational test and evaluation and maintenance of the UGM-27 Polaris Fleet Missile System had long believed Scorpion was struck by her own torpedo, but revised his views during the mid-1990s when he learned that engineers testing Mark 46 batteries at Keyport, Washington just before the Scorpion’s loss, said the batteries leaked electrolyte and sometimes burned while outside their casings during lifetime shock, heat and cold testing.

Although the battery manufacturer was accused of building bad batteries, it was later able to successfully prove its batteries were no more prone to failure than those made by other manufacturers. The results of the U.S. Navy’s various investigations into the loss of Scorpion are inconclusive. While the court of inquiry never endorsed Dr. Craven’s torpedo theory regarding the loss of Scorpion, its “findings of facts” released in 1993 carried Craven’s torpedo theory at the head of a list of possible causes of Scorpion’s loss.

The Israeli submarine, INS Dakar may have been involved in a clandestine mission when she was lost. Israeli documentation is sketchy in describing what she was doing. At 06:10 on 24 January 1968, Dakar transmitted her position, 34.16°N 26.26°E, just east of Crete. Over the next 18 hours she sent three control transmissions which did not include her position. Her final broadcast was at 00:02 25 January, after which no further transmissions were received.

On 26 January the British Admiralty reported the submarine was missing and gave the last known position as 100 miles (160 km) west of Cyprus. An international search and rescue operation began, including units from Israel, the United States, Greece, Turkey, Britain and Lebanon. Although the Israeli Navy in Haifa began broadcasting calls to commercial vessels to be on the look out for Dakar, Israeli officials would not admit the submarine was missing. On 27 January, a radio station in Nicosia, Cyprus, received a distress call on the frequency of Dakar’s emergency buoy, apparently from south-east of Cyprus, but no further traces of the submarine were found.

On 31 January, all non-Israeli forces abandoned their search at sunset. Israeli forces continued the search for another four days, ceasing at sundown on 4 February 1968. Israel denied that Dakar sank as the result of hostile action and stated that Dakar was involved in crash diving exercises on its return voyage and was lost probably as a result of a mechanical failure. On 25 April 1968, Vice Admiral Abraham Botzer, commander of the Israeli Navy, stated that Dakar sank on 24 January 1968, two days before being reported missing due to “technical or human malfunctioning” and not “foul play.”

On February 9th 1969, a year after Dakar’s disappearance, an Arab fisherman found Dakar’s stern emergency buoy marker on the coast of Khan Yunis, an Arab village south/west of Gaza. The Dakar had 2 such buoy markers. One in the bow and one in the stern. They were secured behind wooden doors in cages under the deck and attached to the submarine with metal cables 200 meters (600ft) long. Those doors could be opened from the inside of the submarine. When a submarine is unable to surface, the crew can open the doors and the buoy will surface and transmit for the next 48 hours an SOS message. The location of the sunken submarine can then be determined by radio direction finders. Part of the cable (65 cm) that attached the buoy to the Dakar was found. Scientists and experts examined the buoy number of times and determined that the buoy was attached to the Dakar for a  year until the cable broke completely.

The INS Dakar was located in 1999 at a depth of 900 feet, 70 nautical miles away from her planned route.

The official Soviet Navy finding is that K-129, while operating in snorkel mode, slipped below its operating depth. Such an event, combined with a mechanical failure or improper crew reaction, can cause flooding sufficient to sink the boat. This account, however, has not been accepted by many.

Recently declassified documents indicate that the loss was due to the detonation of a high explosive lens on a nuclear missile, causing the rupture of the pressure hull aft of the conning tower. 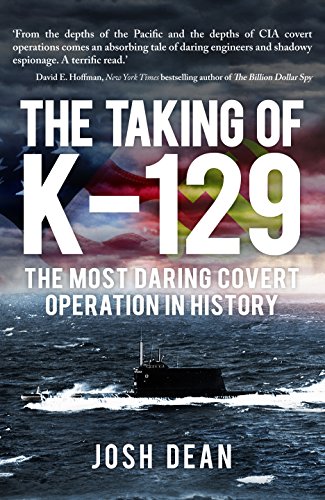 One theory suggests that agent of the KGB took control of the sub and attempted a non-sanctioned missile attack on Hawaii.  They botched the launch procedures, which led to the explosion and loss of the boat. As the wreck was found over a thousand miles south of its normal operating box this theory has gained some credibility.

The attempt to recover K-129 by Howard Hughes and his ship, The Glomar Explorer, is the subject of a book, and makes for interesting reading.