A US Naval Strategic Bomber?

There is some talk in Navy circles about taking the US Air Force B-1B Lancer when it retires at the end of the decade. The target of these patrol bombing squadrons, as envisioned, would be the People’s Republic of China’s Army’s Navy (PLAN). They’re rolling ships out like they plan to use them in a Navy war. It’s not just ships, it’s also.about destroying port facilities.

Naturally, the Air Force doesn’t like the idea of giving up the B-1B to the navy. “Better to scrap it,” is the USAF mantra. The Navy would be stepping on the Air Force’s toes…and the Space Force already has…and the Army wants the A-10 Warthog. 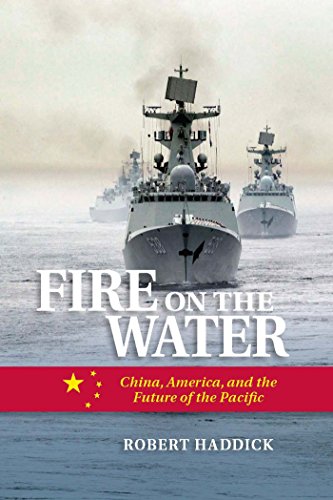 Fire on the Water was published in 2014. It is required reading in war colleges for its depiction of China’s naval expansion and its naval ambition (sort of the same thing).

The Chinese Plague has brought a realization of Modern China’s ruthless pursuit of its imperialistic goals. These don’t stop with the military invasion of Taiwan and the seizure of every oil asset irrespective of which nation owns/claims it.

Countering a 650 ship Chinese Navy with what assets the US is willing to put into the Pacific and Indian Oceans is an outsized proposition that allows China to concentrate forces while America’s are disbursed.

(A Bomber for the Navy, by: Will Spears and Ross Hobbs) This versatility is probably the B-1’s most compelling feature. Of all bombers in service, the B-1 doesn’t just carry the largest payload (75,000 pounds; the B-52 and B-2 carry 70,000 and 40,000 pounds respectively), but its repertoire of supported weapons and combat systems is among the most elaborate fielded by any aircraft today. Included are the aforementioned long-range standoff weapons (LRASM and JASSM), as well as GPS- and laser-guided JDAMs (GBU-31, 38, 54), unguided bombs and sea mines (Mk-82, 84, 62, 65), and a multitude of sensors including the Sniper targeting pod and a Synthetic Aperture Radar. It also features a powerful defensive avionics suite, capable of providing electronic countermeasures against advanced threat systems.

Some examples of potential Navy combat load-outs and mission sets are below. B-1 squadrons normally train to a minimum of two aircraft for a given mission, so the ordnance brought to bear would probably reflect some multiple of the following:

How Much would it cost the Navy?

The B-1 requires 74 maintenance man-hours per flying hour (MMH/FH) with an estimated cost per flying hour of $70K (the B-52 also costs about $70K per flying hour, while the B-2 costs between $110K and $150K). Even if the B-1 fleet were reassigned to the Navy “free of charge,” it would be expensive. Would it be worth an aircraft carrier?

Arrangements could be made to base the Naval Air Fleet in Japan (which anticipates a war with China), Guam, Alaska and Australia (to control the Malacca Straits)

The Navy would have to sacrifice surface platforms for the expensive B-1B program. But what can sink more ships? (note that I didn’t say that the Navy should sacrifice submarines) What  create more artificial reefs in the South China Sea?

Would the Air Force go for it? Would the Navy go for it? What would the Armed Service Committees in Congress think? We need to think about countering Communist China on the high seas and there is no need to reinvent the wheel.