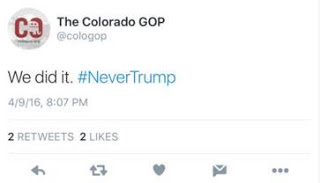 I really can’t stand the Republican Party. The GOP has lost all credibility with me. By that I mean the elite cadre who claim ownership of a party that generally stood for what I believe in. The foolish, childish games played by the “never Trump” gang goes against everything that the primary process should be.
I recommend an article, Ted Cruz: The Walking Ghost for your perusal.
Something needs to happen after this election cycle because watching how the sausage is made has seriously put me off the systems that both major parties use to rig a nominee of their choice.
Maybe I will “go Galt”, or perhaps a credible third option will emerge, but what we have going with the scramble to knock off the front runner is wrong. Gleefully, Little Marco has entered this rat’s nest cabal with Cruz and Kasich to throw his delegates into the mix. In a world of small men, these guys are Lilliputians.