Image from C. S. Swanson and The Daily Time Waster

There is a lot of talk of “man-caused disasters” these days. Janet Napolitano, US Secretary of Homeland Security, had terrorism officially termed as a “man-caused disaster”. Likewise there are a number of the Hollywood set and the political gadflies of the progressive left who continually refer to “global warming” as a man-caused disaster. When the global warming trend wasn’t working (based on scientific measurements), they shifted their cry to “climate change”. 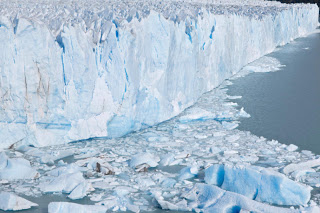 Hollywood and the progressive left feel that simply going “back to nature” will solve the “climate change problem” and Earth will somehow return to a paradise that it once was. Even though that makes no sense to anyone with any background in science, it plays well in movies.
If you look at geologic history, there has been an ice age roughly every 100,000 years. Ice ages and warm periods have alternated fairly regularly in Earth’s history: Earth’s climate cools roughly every 100,000 years, with vast areas of North America, Europe and Asia being buried under thick ice sheets. Eventually, the pendulum swings back: it gets warmer and the ice masses melt. While geologists and climate physicists found solid evidence of this 100,000-year cycle in glacial moraines, marine sediments and arctic ice, until now they were unable to find a plausible explanation for it.

“If an entire continent is covered in a layer of ice that is 2,000 to 3,000 metres thick, the topography is completely different,” says Blatter, explaining this feedback effect. “This and the different albedo of glacial ice compared to ice-free earth lead to considerable changes in the surface temperature and the air circulation in the atmosphere.” Moreover, large-scale glaciation also alters the sea level and therefore the ocean currents, which also affects the climate.

Because Earth’s rotation and its orbit around the sun periodically change slightly, the insolation also varies. If you examine this variation in detail, different overlapping cycles of around 20,000, 40,000 and 100,000 years are recognisable.
Given the fact that the 100,000-year insolation cycle is comparatively weak, scientists could not easily explain the prominent 100,000-year-cycle of the ice ages with this information alone. With the aid of the feedback effects, however, this is now possible.**

The researchers obtained their results from a comprehensive computer model, where they combined an ice-sheet simulation with an existing climate model, which enabled them to calculate the glaciation of the northern hemisphere for the last 400,000 years. The model not only takes the astronomical parameter values, ground topography and the physical flow properties of glacial ice into account but also especially the climate and feedback effects. “It’s the first time that the glaciation of the entire northern hemisphere has been simulated with a climate model that includes all the major aspects,” says Blatter.
Using the model, the researchers were also able to explain why ice ages always begin slowly and end relatively quickly. The ice-age ice masses accumulate over tens of thousands of years and recede within the space of a few thousand years. Now we know why: it is not only the surface temperature and precipitation that determine whether an ice sheet grows or shrinks. Due to the aforementioned feedback effects, its fate also depends on its size. “The larger the ice sheet, the colder the climate has to be to preserve it,” says Blatter. In the case of smaller continental ice sheets that are still forming, periods with a warmer climate are less likely to melt them. It is a different story with a large ice sheet that stretches into lower geographic latitudes: a comparatively brief warm spell of a few thousand years can be enough to cause an ice sheet to melt and herald the end of an ice age.

The explanation for the cyclical alternation of ice and warm periods stems from Serbian mathematician Milutin Milankovitch (1879-1958), who calculated the changes in Earth’s orbit and the resulting insolation on Earth, thus becoming the first to describe that the cyclical changes in insolation are the result of an overlapping of a whole series of cycles: the tilt of Earth’s axis fluctuates by around two degrees in a 41,000-year cycle. Moreover, Earth’s axis gyrates in a cycle of 26,000 years, much like a spinning top. Finally, Earth’s elliptical orbit around the sun changes in a cycle of around 100,000 years in two respects: on the one hand, it changes from a weaker elliptical (circular) form into a stronger one. On the other hand, the axis of this ellipsis turns in the plane of Earth’s orbit. The spinning of Earth’s axis and the elliptical rotation of the axes cause the day on which Earth is closest to the sun (perihelion) to migrate through the calendar year in a cycle of around 20,000 years: currently, it is at the beginning of January; in around 10,000 years, however, it will be at the beginning of July.

I do not suggest in this blog that human-generated greenhouse gas doesn’t have a part to play in climate change, but the evidence seems conclusive that ice ages and periods of “global warming” come and go based on elements that have nothing to do with humanity — and will continue no matter what we do.