The Full Employment for Attorneys Act! 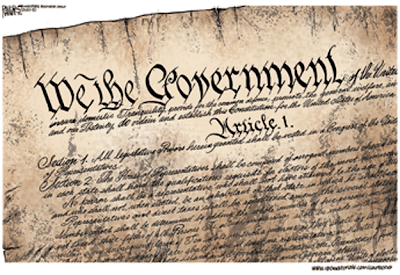 the above States are suing to enjoin enforcement of the “new universal healthcare regime, titled the ‘Patient Protection and Affordable Care Act,’ H.R. 3590 (the Act), was signed into law by the President. [The Act, which exceeds 2,400 pages, is available at http://frwebgate.access.gpo.gov/cgi-bin/getdoc.cgi?dbname=111_cong_bills&docid=f: h3590pp.txt.pdf ] as…

“an unprecedented encroachment on the liberty of individuals living in the Plaintiffs’ respective states, by mandating that all citizens and legal residents of the United States have qualifying healthcare coverage or pay a tax penalty.”

The States allege the following objections;

1. “The Constitution nowhere authorizes the United States to mandate, either directly or under threat of penalty, that all citizens and legal residents have qualifying healthcare coverage. By imposing such a mandate, the Act exceeds the powers of the United States under Article I of the Constitution and violates the Tenth Amendment to the Constitution.”….
2. “the tax penalty required under the Act, which must be paid by uninsured citizens and residents, constitutes an unlawful capitation or direct tax, in violation of Article I, sections 2 and 9 of the Constitution of the United States.”….
3. “represents an unprecedented encroachment on the sovereignty of the states. For example, it requires that Florida vastly broaden its Medicaid eligibility standards to accommodate upwards of 50 percent more enrollees, many of whom must enroll or face a tax penalty under the Act, and imposes onerous new operating rules that Florida must follow. The Act requires Florida to spend billions of additional dollars, and shifts substantial administrative costs to Florida for, inter alia, hiring and training new employees, as well as requiring that new and existing employees devote a considerable portion of their time to implementing the Act.”… [and paraphrasing hereafter] destroys Medicaid, which in Florida alone presently covers tens of millions of residents, can only be accomplished by their continued participation in Medicaid….
4. “Further, the Act converts what had been a voluntary federal-state partnership into a compulsory top-down federal program in which the discretion of the Plaintiffs and their sister states is removed, in derogation of the core constitutional principle of federalism upon which this Nation was founded. In so doing, the Act exceeds the powers of the United States and violates the Tenth Amendment to the Constitution.” ….
For example, no Florida government entity or infrastructure exists to discharge sufficiently all of the responsibilities that will be necessary to implement the Act, to meet requirements related to increases in Medicaid enrollment under the Act, and to operate healthcare insurance exchanges required by the Act.”….
5. “By making federal funds potentially available at the discretion of federal agencies, the Act acknowledges the immediate burden on Plaintiffs to invest and implement the Act, but provides no guarantee that they will receive such funds or that the Act’s implementation costs will be met….”

Now who said lawyers weren’t good for anything?

[I wonder how many DOJ attorneys Eric Holder is going to put on this case to defend the new law?? You’d better believe there will be plenty….]

Well, guess what, MADAM Speaker. IT IS a serious question being asked by serious states attorneys. So I guess we’ll get an answer now, one way or the other. Unfortunately, it is possible that the courts will duck the constitutional questions and decline to decide the case by applying the U.S. Supreme Court’s “political question doctrine”; CLICK HERE

California is missing from the list of plaintiffs! When I saw that, I felt short changed. Maybe I need to move to a state that supports the Constitution of the United States (California is far too progressive to support or defend that old rag).

Oh, don’t fret. The People’s Republik of Kalifornia’s Attorney General-cum-Gov’nor Jerry Brown will be the first in line to file an amicus curia petition in favor of the federal government’s ‘Patient Protection and Affordable Care Act.”