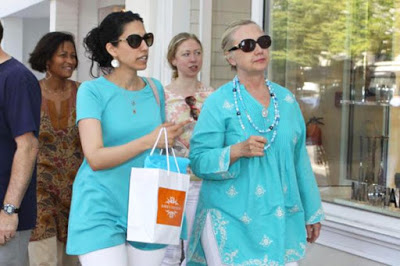 Facebook
Twitter
Pinterest
WhatsApp
Huma Abedin Weiner, the Pakistani-American wife of sexual pervert and disgraced congressman, Anthony Weiner, and long time Deputy Chief of Staff to Hillary Clinton  —  stepped in as Hillary Clinton’s cat’s paw to attack Dr. Ben Carson on points that he didn’t make regarding Islam. Abedin, who considers herself a good Muslim, married Anthony Weiner, a Jew. What was going on there? I can speculate but why bother?
What Carson said, of course, was that he personally would not advocate for a Muslim to be president. Based on recent polling, over 30% of Americans believe that Barack Obama is a Muslim, so that ship may have sailed.
Recently, Barack Obama has denied his Muslim roots and claims to have embraced Christianity at some level. Who am I to try and seek for truth behind those blue lips?

Some believe that the White House needs a staff exorcist. Others claim that the right man for the job is the (famous) Arch Priest, Lone Star Parson. However, if LSP cast Satan out of the White House, the nation would be left without a rudder until the next election… If it went to the Speaker of the House, and LSP went into action, I suspect that we’d be down to the Secretary of Agriculture or somebody before you found one that wasn’t infected.

It might be useful in this scenario for LSP to go to work at the UN General Assembly when the Chinese and Russian leaders are present to cripple our principle adversaries at the same time as he casts Satan out of the White House, Congress and the Supreme Court (leaving many vacancies).

While we’re at it, things at the FBI and the US Department of Justice might move a bit more swiftly on the Hillary Clinton e-mail scandal investigation if an Independent Prosecutor was appointed. I think that Congressman Trey Gowdy could handle that and I’d be happy to step in as his assistant. I don’t want Arch Exorcist LSP to have ALL of the fun.

Getting back to the matter at hand:

Dr. Carson suggested that a devout Muslim’s responsibility to uphold sharia was not in keeping with American Law, based on the Constitution.

Huma is not advocating for a black conservative Republican to be president. After all, she is running Hillary’s campaign. BUT, does that make Ms. Abedin-Weiner a racist?

Since she’s Hillary Clinton’s close personal confidential private personal secretary, I suspect that she should be fired from the Clinton Campaign for her failure to accept the first openly Christian black man for the Presidency. As you all know, Barack Obama isn’t fully black since his mother was white and he was raised by mom, her Indonesian-Muslim husband and by his white grandparents. His black, Muslim father, wasn’t around to help out.

Based on racial credentials, Dr. Carson is more completely racially acceptable. I don’t know that Huma Weiner thought this through, but she still needs to go. (She can remain Hillary’s confidant and they can still wear matching hers and hers moo-moos when shopping) Hillary can still keep Anthony Weiner on her staff, possibly in Huma Weiner’s shoes in a key campaign leadership role. You can’t have too many Weiners around can you? 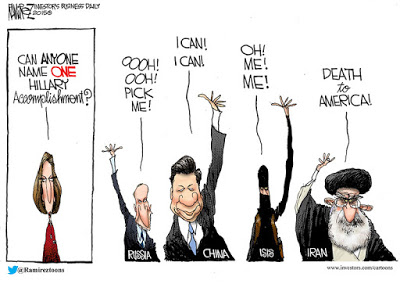 The cartoon fails to take into account the fact that Hillary dodged sniper fire in Bosnia…which is an even greater accomplishment than you might imagine because there was no sniper fire…because she was dodging it. Ask Huma if you need clarification on this.