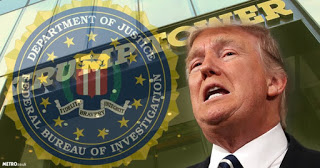 Facebook
Twitter
Pinterest
WhatsApp
Your sermonette today deals with one of the more corrupt portions of the Deep State Swamp, the FBI.  It needs to be addressed quickly and dealt with the one would of dying cancer patient – more below in the sermonette.
It takes a set to flip off Congress, which appropriates money for your corrupt organization.
FBI Director Christopher Wray refused to answer Rep DeSantis when asked if dossier was used to spy on Trump’s Camp, more here (LINK).  REFUSED TO ANSWER?

Which means, of course, that the fake dossier ginned up by the Clinton Campaign was used in FISA Warrants to spy on the Trump Campaign during the course of the election. That was egged on by the Obama Presidency and eclipses Watergate in all respects.
In response to the question, did the FBI spy on President Trump, the answer is yes.

The only solution to this problem with the FBI that has been dogging the sly, puffed up, mendacious, smug agency is to put them under the direct scrutiny of an inspectorate general that reports directly to the president. The FBI’s Office of Professional Responsibility doesn’t have the stroke to discipline a corrupt or obstuctionist director. We need something more. The FBI needs to be reformed NOW. Leadership found wanting needs to be removed the way a surgeon wielding a scalpel would remove a tumor. Unfortunately that means a lot of cutting. Will that remove Russian spies in the FBI ranks (I’m thinking Robert Hanssen here)? Quite possibly. Sorry Putin…
Now for the sermonette part, “Ye shall know the truth and the truth will set you free.”
The corrupt, nasty, lying mainstream media went wild with derision when President Trump announced that he’d been spied on by the Obama FBI. We now know that was true and that the FBI was used as a tool to give Hillary Clinton (lock her up) a pass on gross criminal misconduct and to try and damage President Trump. That situation can not stand.