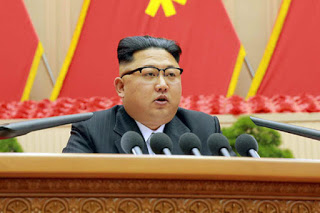 North Korea (a client state of China) has been an international pariah since it was founded. The late Kim Chong-il (Fat Bastard’s daddy) knew that the last thing that the US, China and South Korea wanted was responsibility for feeding and caring for up to 24 million homeless North Koreans resulting from an internal collapse or from a general war.

The de-facto blackmail of the need to feed 24 million starving norks worked, primarily to keep China from doing anything to topple the regime when it became difficult. Sure, they kept Kim Jong Un’s half-brother on ice just in case until he was murdered — but it was a contingency for a smooth transition rather than upheaval and starving masses.
The North Korean nuclear and missile capabilities are components of Kim’s updated reunification strategy.
Kim Jong Un talks and acts as if he believes that under his leadership national reunification is achievable. He would then outdo his ancestors and become the greatest Kim. That is only possible if the US and Japan are deterred from intervening. He and his cohorts apparently judge that they can defeat South Korea if the US and Japan can be neutralized.
Kim judges that the US would not go to war to defend South Korea against a North Korea invasion if that decision resulted in the destruction of San Francisco. He judges that Japan would not sacrifice Tokyo to defend Seoul.
He also apparently judges that he can manipulate the nuclear threat to persuade the US to agree to a peace treaty and withdraw US forces from South Korea. China and Russia are cheering him on because they see little down-side to themselves.
US Strategy 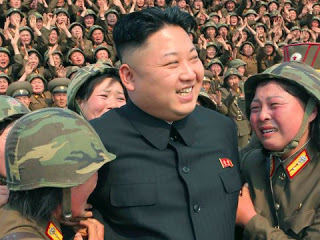 Like his father Kim Chong-il and his grandfather Kim Il-sung, Kim Jong Un needs reassurance that his dream of leading a united Korea will never be realized. The Chinese are best positioned to use diplomacy to impress on him the futility of his dream. South Korea is best positioned to use the build-up of forces to make the same impression.
North Korean can be broken in an arms race in which it is constantly shown that South Korea will never be defeated by North Korea, no matter what North Korea does or builds. South Korea must convey this message in word and action.
The US-led allies took an important step by agreeing to lift restrictions on South Korean weapons and missile payloads. North Korea can never match the military capabilities that South Korea and its Allies can bring to bear.
During the past two days, several writers have commented that one of the ways to contain North Korea is to enable South Korea and Japan to build nuclear arsenals. Japan has already started down that road.
Bilahari Kausikan, a former foreign secretary of Singapore, was quoted by the New York Times, as saying, “A balance of mutually assured destruction in Northeast Asia will not be a satisfactory situation for anyone. But it will not necessarily be unstable, and it may be of some small consolation to Washington, Tokyo and Seoul that the implications for Beijing are somewhat worse.” Asian states have been steadily taking back responsibility for their own security since 1953. North Korean provocations have created conditions for another giant step in that direction.
Of course, the North Koreans can push things too far and will call for a US military response. My sense is that’s where they are headed and then all bets are off.